Iowa's Buffalo Bill Is the Man in the Moon

My only other clear memory of Washington days is a visit to Keith's Theater, where I heard and met the famous old minstrel James Thornton and his wife Bonnie. The rest of the bill was a bust as far as I was concerned, but the opportunity to meet the man who had written "When You Were Sweet Sixteen"—to say nothing of "My Sweetheart's the Man in the Moon" and "The Irish Jubilee"—was too good to miss…But I was sorry to have missed an encounter, a few weeks earlier, between Jimmy and Colonel William F. Cody. The theater manager told me about it with great glee. Cody also had been eager to meet an old favorite, and Jimmy had been brought around to his box. The manager made the introductions. "Jimmy," he said, "I want you to meet the famous Buffalo Bill, who is an admirer of yours." "Glad to know you, Mr. Bill," said Jimmy, shaking hands solemnly. "What part of Buffalo do you come from?"

Above One of a series of elaborate comic metamorphoses (aka shapeshifting) created by Victorian-era British illustrator Charles Henry Bennett (1863) in sardonic reference to Charles Darwin's theory of natural selection, this one titled "Beware of the goose when the fox preaches." Courtesy The Wellcome Library.

It is curious how the faces of acquaintances repeat themselves in foreign lands. Uncanny, too, for what could be more disconcerting than to encounter an old friend jogging past dressed like a mandarin or selling chestnuts in coolie cloth? No sooner had I reached the Orient than this began to happen. Friends and associates I thought I had left behind in America, sometimes fellows I hadn't seen in years, popped up in Yokohama, Tokyo, Shanghai, and Peking, looking very much as I had seen them last, yet subtly altered by the native costumes they were wearing. It was as if one met them coming from a masquerade. In Yokohama it was an old school friend who had been dead for years. He was running a cigarette kiosk near the docks and I knew better than to speak to him. In Tokyo it was a genial barber who used to shave me in Chicago. And in Peking [Beijing] here were so many that my blood ran cold.

Among the friends I met in Chinese garb (and with Chinese faces) were some pretty distinguished fellows…I saw Alex Woollcott many times: once he was chirping seductively at a bird he was carrying through the streets in a bamboo cage. Once my dead mother turned out of a side street and gave me a turn that almost bowled me over. Once I met Bob Casey driving a small donkey attached to a two-wheeled cart: he was selling vegetables. After a time it became an amusing game to look for absent friends and sometimes to hail them genially, and no harm came of it for the Chinese were a friendly people, always ready to hail one in return.

But one day I really did get a shock. Rolling down one of the main thoroughfares of Peking in my rickshaw, I came suddenly abreast of another rickshaw rider headed in the opposite direction. He was bundled up in a fur coat and wore a fur hat, rather like a turban, at a rakish angle. He looked exactly like J. P. McEvoy and for a moment we looked hard at each other. Then I said, “Hello, Mac,” and he stopped his boy and said, “Why, hullo, Vince! What are you doing in Peking?”
Posted by Roy R. Behrens at 12:06 PM

George Herriman | Are Cubists From Cuba?

Above A syndicated cartoon panel (repositioned vertically to read while scrolling) by the American master cartoonist, George Herriman, well-known because of Krazy Kat. This was one of his responses to the controversy surrounding the infamous Armory Show, the first US exhibition of Modern styles of art, Cubism among them.
Posted by Roy R. Behrens at 10:12 AM

Milton Glaser on All Life as Transcendence 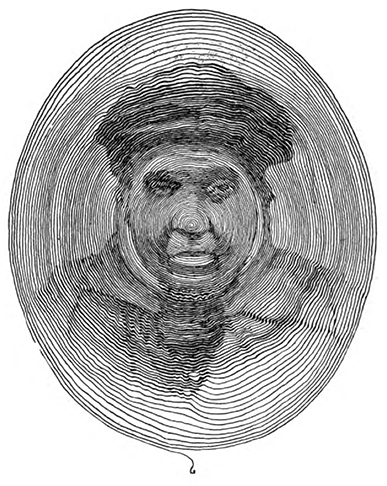 Above This image, created by Thomas Kent, was published in the Strand Magazine in 1909. It was one of a number of graphic peculiarities. A pencil-drawn portrait, it was accomplished with a single continuous line that originated at the tip of the nose.