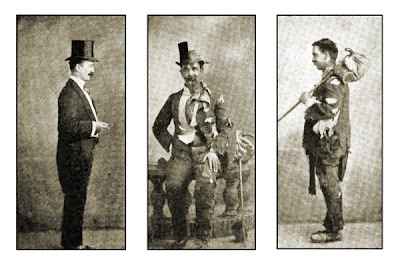 Somewhere I have a delightful book of photographs by Mark Sloan, titled Dear Mr. Ripley: A Compendium of Curiosities from the Believe It or Not! Archives (NY: Bullfinch Press, 1993)—unfortunately, I can't find it at the moment. It includes such oddities as women with baby faces on their knee caps, animals with meaningful shapes on their sides, and other examples of "spurious images." One I especially remember is a photograph of a tavern owner from Cresco, Iowa (hometown of Norman Borlaug), in which he is both dressed and shaven to be two radically different persons, one on each half of his body, e.g., bearded on one half, clean-shaven on the other; dressed in white clothing on one half, in black on the other. I remembered this a few weeks ago when I ran across the set of three photographs shown here, which appeared initially in a Victorian-era British magazine around the turn of the century. It consists of course of three photographs of the same person in the same outfit, but seen from three different directions (there is some cheating going on in the photograph on the right, because the top hat has been omitted), which the result that the same person is both a Victorian "gentleman" and a "hobo," or migrating vagrant.
Posted by Roy R. Behrens at 8:35 AM