A Farewell to Artist Les Coleman


Our friend of many years has died.

British artist Les Coleman liked to say that he was born "one day before peace broke out," making him one of the last World War II "war babies." He died peacefully on January 17, 2013, at Trinity Hospice in Clapham. I recall that we were introduced by another friend, Patrick Hughes. We never met, but for many years he sent me a torrent of "unthunks." In one of them, for example, he simply printed up a card (blank on the verso) that on the recto reads like this: THIS CARD IS TEMPORARILY OUT OF STOCK.

At the conclusion of one of his books, titled Meet the Art Students (1997), he added a brilliantly absurd author's note. Here it is—

Les Coleman moved to Clapham Junction in 1967. During the summer of that year, The Summer of Love, he lost his wallet on Dartmoor containing two pound notes. A doctor found the wallet and handed it in to the police. It took until the autumn to trace Coleman to his new address. He collected the wallet from the Lavender Hill Police Station to discover the money was still inside. In the autumn of 1996 he painted the walls of his front room Sunbeam with Moonshine on the woodwork. In keeping with this color scheme the room has a blue fitted carpet (80% wool) and yellow venetian blinds (made to measure). Among his possessions Coleman owns a small African sculpture which stands on his mantelpiece despite having one leg shorter than the other.

Over the years, I republished many of his unthunks and his drawings, some in Ballast Quarterly Review, and more recently on this blog. I "thunk" he would have chuckled at the gravestone that I've made for him (see above). His humor lives on—

The three letters of the alphabet I most dislike are D, I and Y.

One day America will turn into one big gun.

Once dead the artist falls into a rut.

He put on his dark glasses and rode off into the sunset.

Is turvy-topsy the same as topsy-turvy?
Posted by Roy R. Behrens at 9:09 AM 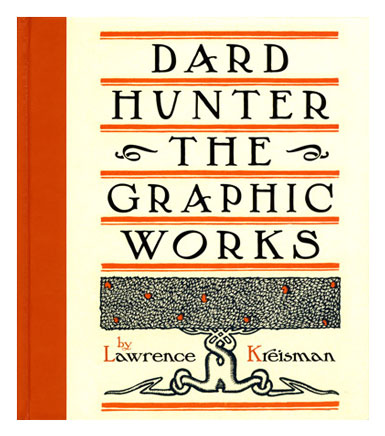 In 1903, an Ohio chalk talk artist named William J. (Dard) Hunter (1883-1966) was touring the U.S. as an assistant for his brother, a stage magician. On a terribly hot day in California, their act was scheduled to follow a lecture by orator William Jennings Bryan (now famously remembered as the villain in Inherit the Wind). All the show props were in place when Bryan arrived, but backstage as he groped for the curtain, he became hopelessly entangled and ripped out wires, strings and threads. Annoyed by the great man’s clumsiness, Hunter secretly dumped red chalk dust into Bryan’s hat, which he had left backstage. After the talk, Bryan jauntily placed his hat on his already perspiring bald pate and walked out into the blazing sun, where he became—literally—red-faced.

I got that from Hunter’s autobiography, My Life with Paper (easily one of my favorite memoirs). That story is not in this welcome new book because its space is limited, and it is an effort to try to zoom in on his achievements as a graphic designer. In fact, it may be the first book to focus so intently on that aspect of his life, because he is far better known as the last century’s foremost authority on handmade papers, an interest that led him to travel the world and to write twenty books about the craft and history of papermaking. There is even a group that meets annually called Friends of Dard Hunter: American Contemporary Hand Papermaking.

Dard Hunter had come from a family of Ohio job printers and newspaper publishers, so, from a youthful age, he was well acquainted with type, inks, paper and printing. During that 1903 tour with his brother’s magic act, he stayed at the Mission Inn in Riverside, California, an early Arts and Crafts landmark. To see that building (and its interior furnishings) piqued his interest and changed his life.

In 1904, he moved to East Aurora, New York (near Buffalo), where he joined the Roycroft Workshops, headed by Arts and Crafts guru Elbert Hubbard. While there (he was allied with Roycroft, off and on, for about six years), he was able to experiment (without having to earn a living) with a range of handicraft media (especially jewelry, furniture and stained glass) and the design of such hand printed items as letterheads, business cards, postcards, advertising booklets, catalogs, bookplates, initial letters, title pages, and entire books. This book reproduces about 85 full-color images of his designs for print and stained glass, the majority of which most readers, even die-hard Hunter fans, are unlikely to have seen before.

During and after his years with Roycroft, Hunter was able to make two research trips to Europe, initially to Vienna in 1908 (newly married, the trip was also a honeymoon), where he witnessed first hand the work of artist-designers allied with the Wiener Werkstatte. He met briefly with Vienna Secession leaders Josef Hoffman and Otto Wagner (neither of whom spoke English), and with architect Adolf Loos (who did speak English, and was especially gracious).

Returning to East Aurora, Hunter was excited about the possibilities of the Arts and Crafts Movement. Almost immediately, he began to prepare to return to Europe in 1910, this time not just as a tourist, but to stay longer and to study in Vienna, to visit Arts and Crafts centers in Germany, and lastly to live briefly in London, where he worked as a designer. In late 1911, he returned from Europe with his wife, distanced himself from the Roycroft Workshops, and soon set up a paper mill in Marlborough-on-Hudson in New York State, where he committed himself to the handmade production of paper. He eventually resettled in Ohio, where, in essence, he devoted his remaining life to the art, craft and science of papermaking. more…
Posted by Roy R. Behrens at 10:26 AM

This is a richly illustrated book on the history of printing—or, more accurately, on one area of printing. It is not a history of “book printing,” but of a less exalted branch called “job printing.” Historically, book printers (or so it has long been widely assumed) are prestigious purveyors of culture, while job printers are those who produce “ephemera,” the everyday stuff that is rarely preserved—handbills, posters, tickets, advertisements, trade cards, stationery, labels, receipts, passports, charts, certificates, postage stamps, banknotes and so on.

When Samuel Johnson wrote his Dictionary (1755), he made no distinction between designing and printing—a typographer, by his definition, was “a printer.” Continuing well into the twentieth century, arranging elements on a page was part and parcel of printing, so there was no additional cost for “graphic design,” a phrase that is commonly said (erroneously, I think) to have been used for the first time by book designer W.A. Dwiggins in 1921. Today, as designers and their clients know, graphic design is its own thriving category, and the work of a graphic designer is billed in addition to printing.

This well-written and beautiful book, titled Graphic Design Before Graphic Designers: The Printer as Designer and Craftsman 1700-1914, is a history of what printers did, as clandestine designers, in advance of the formal establishment of graphic design as a career field. It also provides an account of how the design services of craft-based printers were deliberately discredited by graphic and advertising designers in order to justify charging for a service that had once been gratis. Surely, it must have been argued, the author writes, “the modern businessman’s media requirements could only be addressed by a new profession made up of university-trained communication strategists.”

The book is organized in chronological, alternating chapters (there are six in all, plus other parts), each of which offers two components: First, a persuasively-written historical text, detailing what took place, in what order and why, including the names and achievements of individuals who were major players. These narratives are illustrated by well-chosen informative images from the history of printing. Second, each chapter also features about 30 pages of the most wonderful full-color images of examples of job printing, from every category imaginable. more…
Posted by Roy R. Behrens at 10:03 AM