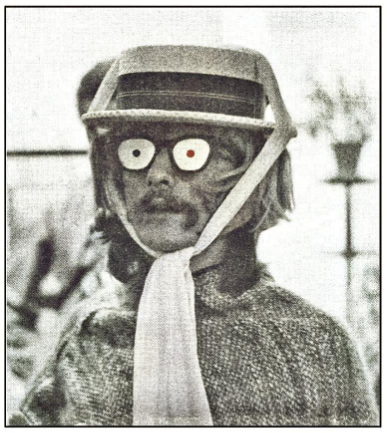 Above and below: Two photographs that surfaced only recently in the post-retirement agony of downsizing. They appeared side by side in an issue of The Northern Iowan, the student newspaper at the University of Northern Iowa, on October 14, 1975. I was an assistant professor then, and, as part of the freshman foundations program, had initiated a student competition called the Rube Goldberg Drawing Machine Contest, in which students were challenged to invent absurd self-operating contraptions that would somehow result in a "drawing" (loosely defined). I was also one of the judges, as shown above. The caption for that photo reads: "A judge at the Rube Goldberg content, Roy Behrens, did not seem to get a great deal of sleep the night before the contest, or he just saw a great looking piece of art." In the photo at the bottom, I have been joined in the judging by writer Robley Wilson (who was editor of the then-famous North American Review), who is attired in a fine-looking British judge's wig. The caption for that photo reads: "A large crowd was on hand…and some of them are shown looking at the first place entry in the drawing machine contest." I still remember the first-place winner, invented by a student named Mark Mattern. At the end of a sequence of absurdly unrelated events, it made a silhouette of a dog—with gun powder.

A memorable humorous passage from David Meyer's memoir of his friend Ernest Summers, in Ernie and Me (c2003)—

His name was Ernest Summers and he told this joke about himself: When he was dead the marker on his grave would read, "The worms are eating in dead Ernest." 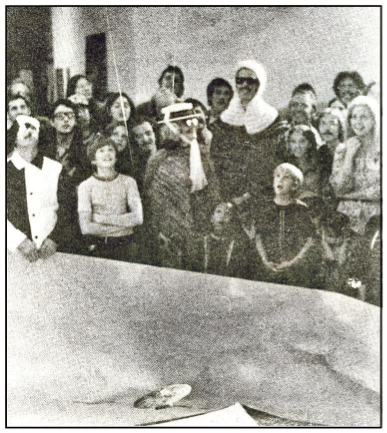 Arcimboldo portrait | Do you carrot all for me?

Above A reversible painting (view top side up or upside down) by the Italian master Giuseppe Arcimboldo (c1526-1593), especially known for his portrait heads comprised of visual pun arrangements of fruits, vegetables, flowers and so on. This one is referred to as Reversible Head with Basket of Fruit. c1590. Oil on panel.

Anon
Do you carrot all for me?
My heart beets for you,
With your turnip nose
And your radish face.
You are a peach,
If we cantaloupe,
Lettuce marry;
Weed make a swell pear.
Posted by Roy R. Behrens at 7:40 PM

wassily wassily I say unto you—please be seated 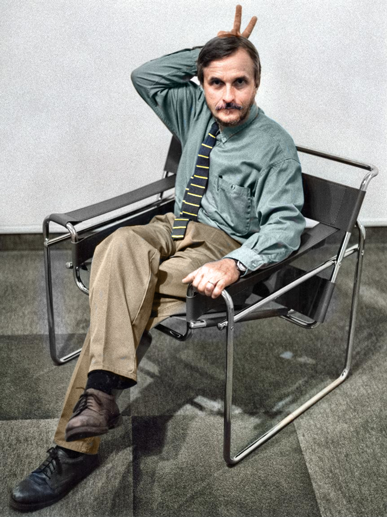 Above The latest in a sequence of historic views of various individuals posed in Marcel Breuer's celebrated "Wassily chair," Bauhaus-era. © Roy R. Behrens.

Come smoke a coca-cola
Drink catsup cigarettes
See Lillian Brussels wrestle
With a box of castanets
Pork and beans will meet tonight
And have a finished fight
Chauncey de Pew will lecture
on Sopolio tonight
Bay rum is good for horses
It is best in town
Castoria cures the measles
If you pay five dollars down
Teeth extracted without pain
At the cost of half a dime
Overcoats are selling now
A little out of time
Do me a favor—drop dead.

Above These diagrams are not as strange as they might appear. They are an ethnologist's renderings of the purposeful hair designs of Native American Osage boys. See examples below as well. Originated by Francis La Flesche (1857-1932), who was himself a Native American, they were published in a US Government report, titled "The Osage Tribe: Child Naming Rite" in 1928. I first saw them in the early 1970's when they were reproduced in Claude Levi-Strauss, The Savage Mind (University of Chicago Press, 1968), a book that was greatly important to me at a time when I was trying to grasp the process of categorizing.

These unusual haircuts are like pictorial logos. Each haircut represents a different clan, which is in turn connected with a particular animal (usually). In the examples shown above, they represent (as numbered) (1) Head and tail of elk. (2) Head, tail, and horns of buffalo. (3) Horns of buffalo. (4) Buffalo's back as seen from above. (5) Head of bear. (6) Head, tail, and body of small birds.