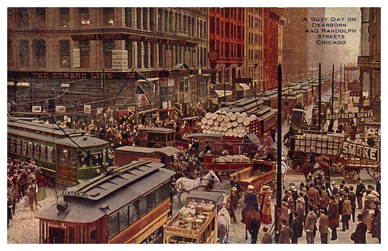 Above A Busy Day on Dearborn and Randolph Streets, Chicago. Vintage postcard.

Chicago in the second decade of this [the 20th] century was a mentally disturbing and therefore, to a young man, a mentally exciting place. Metropolis of an inland empire, its god was the dollar and municipal corruption his handiwork. “No decent man will touch politics” was a phrase heard daily and self-defensively from the lips of every “decent” man. Extremes of luxury and squalor contrasted even more violently than in the Dublin of my childhood or the London of my youth. On the east its huge inland sea bounded the city; when the wind blew from the west, where the stockyards lay, the smell of blood, seeping through shuttered window and bolted door, filled every room of every house. In summer pitch from the city’s pavements bubbled underfoot. In winter the streets leading to Michigan Avenue had ropes waist-high round corner buildings, for foot-passengers to pull themselves past the corner against the gale; blizzards swept the city, paralyzing traffic. And in that climate, amid Chicago’s material and moral filth, mental life fought for existence like a sapling in a jungle.

that Lazarus was the original raised character

Tuesday, March 1, 1955: In the city room today some of us were discussing a report that the New Testament has been published in Braille. Frank [Kappler] said: “Yes—but did you know that Lazarus was the original raised character?”

“Come forth, Lazarus! And he came fifth and lost the job.”

When I made a drawing of [American writer Sinclair] Lewis [who had just received the Nobel Prize] I had to take the train out to his country house. I was all in when I arrived but the afternoon and the trip back were so amusing I forgot how tired I was.

I made the drawing in his study, while Mr. Lewis wrote out checks to pay his bills with the Nobel Prize, and there were freshly-written checks all over the desk and the floor. I would have liked to paint him in that foreground of blue paper, which only increased the redness of his face and hair. He looked just like a carrot.

In a basket beside his desk there was a tiny baby with a wisp of red hair on the top of its head. Each time Mr. Lewis would finish a check, he would talk to the baby: “Isn’t it wonderful, Michael, that Daddy has won the Nobel Prize?” I had an awful time making the drawing because he was never still, but his face had made such an impression the moment I saw it that the drawing was fairly successful.

On the train back to New York Mr. Lewis joked a great deal about receiving the prize and the fuss that it had created throughout the country, especially among other contemporary writers. He told me how mad Theodore Dreiser was…and then he added that Dreiser ought to be tinting “fish plates.” I didn’t get the connection, and I don’t think there was any, as Mr. Lewis had had about ten highballs!

living in a poky village in a backward county

Mr. Pickford was one of the finest Sanskrit scholars of his day. He was very poor; he had sacrificed his life to Sanskrit and his sister. His sister kept house for him in a little village where he was rector, a few miles outside Ipswich; a dour, bitter, selfish woman whom no one liked. So, for his sister's sake, he had put aside marriage, advancement, happiness, and had taken that obscure living in a poky village in a backward county, to make her a home where were few to hate her.

One day a letter came addressed to Mr. Pickford. Through several weeks he had been hoping for it; if it came, it might offer him an academic position where he could carry to fruition his life's work in Sanskrit. Every morning his sister went downstairs to meet the postman and see whether the letter had come: "No, John, it has not come today; perhaps it will come tomorrow."

Long afterwards the Vice-Chancellor in whose gift that position lay, meeting Mr. Pickford accidentally in the streets of Ipswich, greeted him coldly: "I considered it discourteous of you not even to have acknowledged the offer which I made you." Mr. Pickford made no comment. But, when he got back to the ugly, lonely, village rectory, he spoke to his sister. "Yes," she said defiantly, "of course the letter came; I read and burned it. I'm very happy where I am, and you're much better off in a place suited to you."

A little later…[Mr.] Pickford killed himself. My father [an Anglican clergy] preached his funeral sermon. There was no mention of, no hint of reference to, that story in it; but the Stoic view of self-murder was upheld by the Anglican preacher [who years later did the same].

rudimentary multiple nipples on a hydroplane

[This is Browne’s account of time spent at the home of the parents of his friend and associate Robert Bell, whose] father, an eminent banker, terrified me, but I sat rapturously at his mother's feet; she had as many laughter-wrinkles round her eyes as there are waves in a field of corn.

One evening her famous brother-in-law, Alexander Graham Bell—Telephone Bell, as we younger folk inevitably nicknamed him—brought his charming deaf-mute wife [née Mabel Hubbard] to dinner as it was her disability which had first led him to the study of sound. During dinner he talked of a new hydroplane which he was building, the intensive breeding of sheep and rudimentary multiple nipples on human beings. Not one of us had an elementary acquaintance with one of his subjects, yet he held us all spellbound. After dinner his nephew and I steered him carefully into a corner: “How on earth did you keep us so interested in things of which we knew nothing?” For two memorable hours the old man thought aloud. Finally he reached a conclusion. “It is not primarily what a speaker says which interests his hearers—be he conversationalist, preacher, lecturer, actor or even writer—nor the words in which he says it, nor his manner of delivery, nor his personality; these things help or hinder but are secondary. The primary cause of sustained interest, I believe, is this. Each time that a speaker—or writer—pauses, for however infinitesimally brief a moment, he builds a bridge in his own mind over the silence between the word which he has last uttered and the word which he will utter next. If his hearers cross that bridge before him, he bores them; if they fail to cross it, or cross it too late, he loses them; if they cross it with him, he holds and keeps them.”

palmetto bugs / as large as mice and quicker still

•••
In reading the following passage from the autobiography of American artist Abel Warshawsky, I was reminded of those times in my life when I have lived in parts of the country (Hawaii and the Deep South) where apartments were inhabited by huge cockroaches, as large as mice and quicker still.

I once climbed into the shower to find one on the curtain, and, on another occasion, I was typing in the living room on a Sunday morning when something fell from the ceiling and landed on my head—I knew immediately what it was. In the South, these are politely referred to as “pametto bugs,” but when we moved to Cincinnati, we had to pay admission to see the “live insect exhibit” at the zoo, to learn that in the North they're called the “American cockroach.” Not one of my favorite things to recall.

[In a Paris studio] Once accustomed to the creaking wire mattress, I slept more soundly there than I have since in many a luxurious bed—this, despite the nightly incursions of roaches, which infested our building. My horror of these beasts was insurmountable. One Sunday morning, while lying on the counch, I was discussing with my companions ways and means for ridding ourselves of this pest. Glancing up at the ceiling, I saw three of the loathsome vampires. With a cry of horror I seized my shoes and started bombarding the enemy. Roars of laughter broke from my companions, The roaches had been painted on the ceiling, while I slept, for my special benefit!

if you don't mind please i must leave i smell bad

What the pitfalls of literal translation from one language to another can be, I also learned to my cost. Spending the evening with some French people I had met, I was attacked by a splitting headache and felt I must get back to my studo. Desiring to make explanation to my hosts for leaving so abruptly, I made the literal translation of “I must leave, I feel bad,” which I phrased “Il faut que je pars, je sens mauvas,” not realizing that I should have said, “Je me sens mal,” for “sentir mauvais” means “to smell bad.” This astounding avowal was too much for even French politeness, and the laughter that greeted it still rings in my ears. Such verbal faux pas were a speciality of mine in those days, and caused me often great embarrassment, for I never knew to what I might commit myself.

Ripley's ghost illustrator / Believe It or Not! 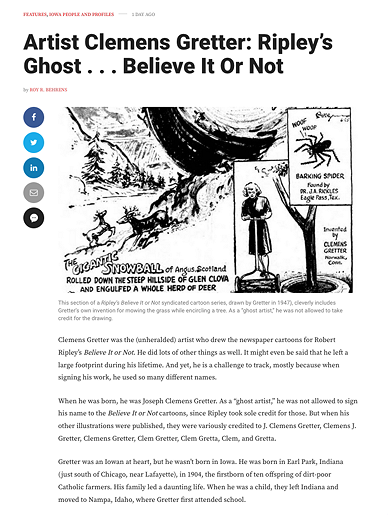 Above Article in the current issue (October 2021) of The Iowa Source about American illustrator Clemens Gretter. Until recently, I had never heard his name, but (although I didn't realize it) I was familiar with his work. Why? Because in the 1940s, he was the "ghost illustrator" (not unlike a "ghost writer") for Robert Ripley's syndicated newspaper cartoon panel, famously known as Believe It or Not! As part of his contract, he was not allowed to sign his name, since the credit was given to Ripley instead. But Gretter was also responsible for a wide range of other cartoons, illustrations, and book designs, for which he did receive credit. Here's the whole story more>>>