Sandburg's Story of Fingers and Forks

A NORWEGIAN told me his mother sent him to a store to get something and he came home saying he forgot what she sent him for. She sent him again with the words, "What you don't keep in your head your feet must make up for, my little man." When he ate with his fingers and his grandmother told him to eat with his fork, he said, "Fingers were made before forks," and she cornered him, "But not your fingers."
Posted by Roy R. Behrens at 1:54 PM

You Can Kiss My Foot

From Bruce Siberts, in Walker D. Wyman, ed., Nothing But Prairie and Sky: Life of the Dakota Range in the Early Days. Norman: University of Oklahoma Press, 1954, pp. 5-6.—

Our family were strict Methodists, attended church regular, and none of them ever got drunk, chewed or smoked tobacco, or used bad language. Only Uncle Ed, who bought cattle and hogs for the Chicago market, was different. He chewed tobacco, was suspected of drinking beer once, and had the reputation of seeing a show in Chicago called The Black Crook, in which women wore tights. As Uncle Ed and Mr. Crum, a neighbor, were the only Methodists who used tobacco, except on the sly, it was urged that they be expelled from the church. But looking over the records, it was learned that they were the best in paying money for the support of the church so they were allowed to remain in good standing. However, the minister preached a good sermon on the evils of tobacco, saying "There you sit with hell juice running out of your mouths," and on in that line for two hours. Uncle Ed said that the preacher could kiss his foot and go to hell. Only he didn't say foot.
Posted by Roy R. Behrens at 11:51 AM

Stuarte Cloete on the Phases of Life

The first twenty years of anyone's life are more or less spent in growing up, not that a human being is developed or fully matured by then, but it is an approximation. The next twenty years in the life of a man or a woman are the period which is dominated by the sexual urge. Biologically speaking, at forty, both men and women can be and often are grandparents. Sex may continue to manifest itself till an advanced age but the fury has gone out of it…This is the period of maturity. Success has either been achieved or not achieved by forty. The ladder must, by this time, be at least partially climbed. After sixty comes the last period of life—the evening, where thought and memory replace action. Where a man not only puts his material affairs in order but tries to sort out his life, to evaluate his failures and successes. Where, with sufficient perspective, he can at last begin to see the wood without being confused by the trees.
Posted by Roy R. Behrens at 11:57 AM 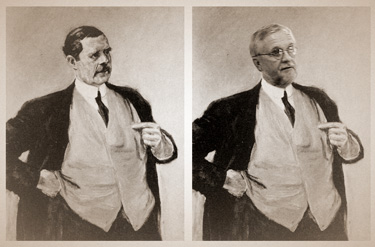 
[Jackson] Pollock's mother, Stella McClure, the eldest child in her family, was born on May 20, 1875, in a log house near the little town of Mount Ayr, Iowa. Her parents were stern Presbyterians who believed that there was just one straight and narrow path to salvation. Life on the McClure farm was harsh and strictly regulated, and misfortunes, which came frequently, were accepted with a kind of stoic resignation. One of Stella's sisters died of convulsions in her arms; another died young of tuberculosis. Around 1890 the farm failed, and the family moved to Tingley, Iowa, where her father, John McClure, found work as a brick-mason and plasterer…
The background of Jackson Pollock's father was, if possible, even grimmer than that of his mother. Two years younger than his wife, Roy Pollock was born to the name of LeRoy McCoy on February 25, 1877, on a small farm in Ringgold County, Iowa. In 1879, when LeRoy was two, his mother and sister both died of tuberculosis. Despairing and destitute, John McCoy gave away his infant son to James and Lizzie Pollock, a poor farm couple in Tingley who were not his relatives.
Posted by Roy R. Behrens at 4:46 PM