Snaggle-toothed | a dancer and a mountain lion

Above Photograph of Don Lorenzo Hubbell, Arizona trading post owner. His family founded the Hubbell Trading Post (a National Historic Site) on Highway 191 near Ganado AZ. He was supportive of the efforts of American anthropologist Edward T. Hall, who worked with the Native Americans in the area of the Four Corners during FDR's implementation of the New Deal. Hall also described Hubbell in a later, brief memoir, titled West of the Thirties (NY: Doubleday, 1994), in which this photo was reproduced.

Lorenzo had been given the Navajo name of Nakai Tso (the Big [or Fat] Mexican). A snaggle-toothed man of tremendous girth and immediately obvious appeal, Lorenzo chewed tobacco, which he spit into a coffee can on the floor next to his foot whenever he needed to stop and think. Each conversation was punctuated by a splat as Nakai Tso, like a practiced bombardier, zeroed in on that can. His skin was mottled from what must have been a liver disorder; he spoke with a gravelly rasp that was more like a thick whisper than an ordinary conversational voice. He was able to communicate expressively with his left eye while speaking out of the right side of his mouth. When he pushed himself out of his chair, the movement transformed what only a moment before had been a mass of flab into a cross between a ballet dancer and a mountain lion—the grace, ease, and speed of his movements were truly extraordinary. Relatively expressionless of face, he nevertheless had a twinkle in the eye that came and went with the tempo of the conversation. To know what was happening in his head, one had to attend the twinkle. When he encountered lies or fraud, the twinkle became a glint. Like most businessmen in the West, Lorenzo wore the pants of a nondescript gray business suit supported by narrow suspenders, a shirt to match, a tie, and a straight-brimmed four-X beaver Stetson hat. I never saw him dressed any other way. In spite of a rather rough exterior which was typical on the reservation in those times, Lorenzo had an air that set him apart. As I had suspected, he was no ordinary man.
Posted by Roy R. Behrens at 7:02 PM 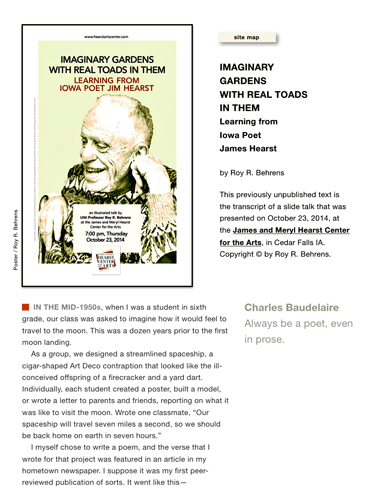 I still clearly remember the day I met Iowa poet James Hearst and his wife Meryl Hearst for the first time. I remember it in part because I have a photograph of it. It took place during my freshman year at the University of Northern Iowa (known as the State College of Iowa in those days). I was an art student, and I had just returned to Iowa from a summer in California, where I had the fortune to study pottery with a person who had been among the first women students at the Bauhaus in Weimar, Germany. The UNI Department of Art hosted an on-campus event in which non-art members of the faculty were invited to a gathering at the ceramics studio quonset hut, where they painted their designs on greenware pots that had been wheel-thrown by the students. In that surviving photo, I am quietly standing beside music professor Don Wendt and Meryl Hearst. James Hearst is not in the photo, but he was nearby in his wheelchair. …more>>>
Posted by Roy R. Behrens at 4:26 PM 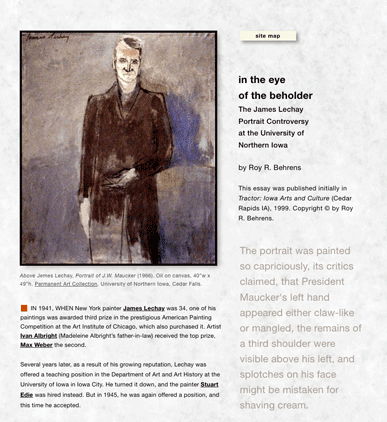 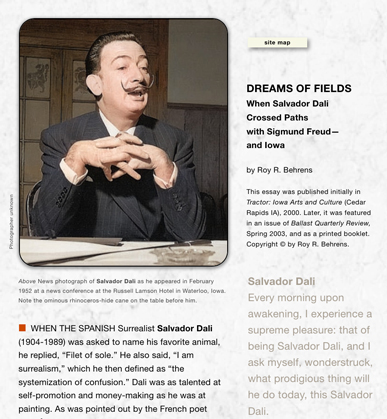 Few people know the story about the visit of surrealist artist Salvador Dali to the University of Northern Iowa campus (Iowa State Teachers College at the time) in February 1952. Not surprisingly, it has moments of hilarity. An updated version (enlarged and redesigned) is now available online at this link.
Posted by Roy R. Behrens at 11:30 AM