Above Beginning tomorrow and continuing for two weeks (August 23 through September 5, 2015) is an exhibition of about twenty large-sized pages of exquisitely drawn and constructed comic art by Jared Rogness, an Iowa-born (and now California-based) illustrator.

We've blogged about him once before in reference to his magazine short story illustrations. For a better sense of the quality of his current work, see the detail posted below. We've known about and admired Jared's work for a long time, and in fact had the pleasure to work with him in the late 1990s and later, when he was a student in the Department of Art, University of Northern Iowa.

In his student days, he was known on campus as e-Chicken, by which pseudonym he published in the student newspaper some of the most biting (and hilarious) captioned cartoons about the ills of American life. Our nation being more sickly now than perhaps ever before (recall the recent Republican Presidential Primary Debate), we wonder what e-Chicken's insights would be.

Postscript: Below also are photos of some of the students who came to look at Jared's work. One indication of  the popularity of an exhibit is the number of exhibit posters that disappear from the hallways, and end up on students' walls. This one set a record. 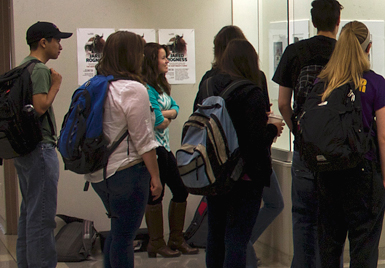 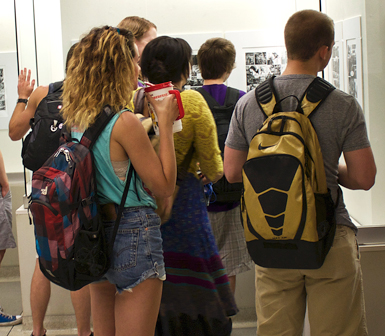 Above Poster by Stephanie Berry, graphic design student, Department of Art, University of Northern Iowa, in celebration of the typeface Futura (2015)

So many people who say they are artists are just technicians who are trying to capture the PR wave of something avant-garde; the work may be different, but the intention sometimes looks so shallow. So many people now, not only in painting and sculpture but in music and probably literature, seem to be producing cheap knockoffs and are into just promoting themselves.

A large-format interpretative chronology of the assassination of US President Abraham Lincoln, designed by Jordon Deutmeyer, graphic design student, Department of Art, University of Northern Iowa, 2015.

Just after we moved to Fargo [ND], the summer of 1932, Mother took Grandma Critchfield down to Knoxville, Iowa, to visit McLain in the veterans hospital. He'd been there ever since his brain was injured in that plane crash during World War I. Mom took the three boys along with her. We'd moved into a house on the north side of town and the Hopes were visiting… Mr. Hope had fallen asleep at the wheel and woke up when his car hit a passing train at a crossing. He walked for help with a shattered kneecap. Anyway, the whole family of Hopes came to our house in Fargo to recuperate. When Mom got back from Iowa, she hunted all over for the toilet brush and found it in the kitchen. Helen had been using it to scrub vegetables.

In that first house in Fargo, a family named Hilliard lived next door… Mr. Hilliard wore shorts and a goatee. The shorts came below his stomach and one day his little girl stuck a nasturtium in his navel and he left it there all day. Mr. Hilliard was very congenial. He'd call over, "Yoo hoo! Let's all come out! I've got a good dirty story!" Daddy was always joking too. One time, a man had been chasing girls in the park and Daddy said, "I just wish he'd jump out of the bushes at Betty. She'd scare 'im." Another time, when Aunt Helen was visiting from Iowa with her two-year-old and a newborn baby, Daddy said, "You people in Iowa breed just like rabbits." That didn't go down so well.

A large-format interpretative chronology of the assassination of US President Abraham Lincoln, designed by Stephanie Berry, graphic design student, Department of Art, University of Northern Iowa, 2015.

I was born in Waterloo [IA]. A great deal of Iowa, southern Iowa, particularly, didn't have electricity until the end of World War II. I was eleven years old before I lived in a house with running water.

[One day during the Depression] This one man came in—it was right before Christmas. My husband had a very nice suit, tailored. It was a black suit with a fine white pin-stripe in it. He put it to one side. I thought he didn't like the suit. I said to this man, "Your clothes are all ragged. I think I have a nice suit for you." So I gave him the suit.

The following Sunday my husband was to go to a wake. He said, "Where's my good suit?" And I said, "Well, Daddy, you never wore it. I—well, it's gone." He said, "Where is it gone to?" I said, "I gave it to a man who had such shabby clothes. Anyway, you got three other suits and he didn't have any. So I gave it to him." He said, "You're the limit, Mother."

A large-format interpretative chronology of the assassination of US President Abraham Lincoln, designed by Gina Hamer, graphic design student, Department of Art, University of Northern Iowa, 2015.

Robert Graves, Goodbye to All That [his famous autobiography] (Penguin Books, 2000), recalling the eccentricity of Greek scholar Gilbert Murray—

Once, as I sat talking to him in his study about Aristotle's Poetics, while he walked up and down, I suddenly asked: "Exactly what is the principle of that walk of yours? Are you trying to avoid the flowers on the rug, or are you trying to keep to the squares?" My own compulsion-neuroses [OCD] made it easy for me to notice them in others. He wheeled around sharply: "You're the first person who has caught me out," he said. "No, it's not the flowers or the squares; it's a habit that I have got into of doing things in sevens. I take seven steps, you see, then I change direction and go another seven steps, then I turn around. I consulted Browne, the Professor of Psychology, about it the other day, but he assured me it isn't a dangerous habit. He said: "When you find yourself getting into multiples of seven, come to me again."

A large-format interpretative chronology of the assassination of US President Abraham Lincoln, designed by Bailey Higgins, graphic design student, Department of Art, University of Northern Iowa, 2015.