To celebrate the tradition of that seminar, in the fall of 2014, graphic design students in the Department of Art at the University of Northern Iowa, were asked to design a series of posters that focus on Wright and his accomplishments, not limited to Cedar Rock. The poster above was designed by Kelly Cunningham in a course in Digital Image Design (2014).

Richard Neutra, Life and Shape [his autobiography] . New York: Appleton Century Crofts, 1962, pp. 179. Neutra, a Viennese-born architect, came to the US in 1923, and eventually moved to Chicago, where he searched for buildings by Frank Lloyd Wright, whose work he had admired while living in Europe—

I looked around the western part of Chicago, and south, near the university, but nobody could tell me anything about this famous architect I was talking about. People were flabbergasted that I should have picked up the ideals of a great Chicagoan in a European library…

But where were the prairies, the woods, the lawns? Where, anyway, was Woodlawn Avenue? Once I got there, I would actually find the famous Robie House. My heart always skipped when I imagined the moment: I would ring the doorbell and ask in very broken English, "Is Mr. Robie in?" And so I finally did.

"Mr. Robie? Never heard of him." There was a Mrs. Wilson living there. She had bought the house some years back, and was probably the fifth owner. She wasn't at all enthusiastic about it—but to me it was a lovely, wonderful place.

I asked Mrs. Wilson why she had bought the house. "Oh," she answered, cold fish, "I got it very cheap. The man who owned it had to get out. No, she didn't particularly like it, and she had all kinds of petty criticisms. Nothing was working, of course; at that time the house was already some fifteen years old, and badly neglected.

Above Hypothetical postage stamp, commemorating Art Deco architecture, by University of Northern Iowa graphic design student Stephanie Berry (2014). Reproduced below is a block of stamps that repeats and juxtaposes the single stamp to produce a synergistic whole.

Mr. [Horace] Liveright, my publisher, fetched me and took me to the Ritz where we dined with [various notable people, among them American financier and presidential adviser Bernard Baruch]…Mr. Baruch (whose name I mistook for Brooke) has white fair, fine features and stands 6 ft. 4. I gathered from the general conversation that I was talking to someone whom I should have heard of, and as I could think of no distinguished Brooke but [English poet] Rupert Brooke, I asked if he was related. And then Mr. Baruch rather reprovingly spelt his name for me. Instantly by a faint glimmer of memory, "Wall Street" came to my mind and I seemed to have heard in London that he was a friend of [her cousin] Winston [Churchill].

Above Hypothetical postage stamp, commemorating Art Deco architecture, by University of Northern Iowa graphic design student Danielle Schweitzer (2014). Reproduced below is a block of stamps that repeats and juxtaposes the single stamp to produce a synergistic whole.

Richard Neutra (Austrian-born American architect) in his autobiography, Life and Shape. New York: Appleton-Century Crofts, 1962, p. 123. In this passage, he describes his experience as an army officer during World War I, when, accompanied by an orderly, he traveled on horseback through northeastern Montenegro—

[My orderly] was not obnoxious in any way. He didn't step on anybody's toes, or kiss any girls, or do anything else that might have caused trouble. His slow talk was like that of his Saxon ancestors. He came from Transylvania, the southeastern section of of Hungary near the mountainous Rumanian border. His home village was so underdeveloped that he had never seen a stairway. When he first beheld stairs, later on in a "hinterland" hotel, he climbed them on his hands and feet; he only knew how to use a ladder.

Philip Hone (American diarist and Mayor of New York), talking about US senator and orator Daniel Webster, on March 29, 1845, in The Diary of Philip Hone—

Old men are apt to be careless and slovenly in their dress…Black is safest, it is peculiarly the garb of a gentleman, and never goes out of fashion. But in this matter of dress one of our great men (than whom there is non greater), Mr. Webster, has a strange fancy. He is not slovenly, but on the contrary tawdry, fond of a variety of colors. I do not remember ever to have seen him in the only dress in which he should appear—the respectable and dignified suit of black. I was much amused a day or two since by meeting him in Wall Street, at high noon, in a bright blue satin vest, sprigged with gold flowers, a costume [as] incongruous for Daniel Webster as ostrich feathers for a sister of charity.

Dorothy [Christopher Isherwood's maid] had never heard of [Russian-born composer Igor] Stravinsky. She thought she recognized Igor as a Jewish comic on the Molly Goldberg show.

In 1953, he [Stravinsky] broke off his connection with Hollywood's two Russian [Orthodox] churches, for the reason that the priest-confessor had asked him for an autograph.

For no reason I started to feel very good. Suddenly I knew how to enter into the life of everything around me. I knew how it felt to be a tree, a blade of grass, even a rabbit. I didn’t sleep much. I just walked around with this wonderful feeling. One day I was passing a diner and all of a sudden I knew what if felt like to be a lion. I went into the diner and said to the counter-man, "Bring me a steak. Don’t cook it. Just bring it." So he brought me this raw steak and I started eating it. The other customers made like they were revolted, watching me. And I began to see that maybe it was a little strange. So I went to the Dean [at the school where he was teaching] and said, "I feel too good. Get me down off this." So they put me into the tubs.
Posted by Roy R. Behrens at 9:29 AM

Another of [drawing instructor Frank N.] Wilcox’s exercises [at the Cleveland Institute of Art in the 1920s] was to go down to the Five and Ten on 105th Street and look at the objects in the window for 45 minutes. Back at the school, the students would make drawings of precisely what they had seen—the objects, the prices, and every other detail. After completing the drawings, they went back to the store window to make sure that everything was accurate.

On Sunday afternoon, December 7, 1941, my father and I were watching a football game in Rockville Center, Long Island, when a loudspeaker announced the bombing of Pearl Harbor. The game went on as though the statement had not been understood, or taken for another Orson Welles radio hoax, but when twice repeated, the stunned, disbelieving crowd in the bleachers began to drift away. As we drove back to Manhattan, the automobile radio sputtered news bulletins, one of which said that the Museum of Fine Arts in Boston had been cordoned off by police because of concern that its great collection of Japanese Art might be endangered by reprisals.

Teaching Drawing in the Dark 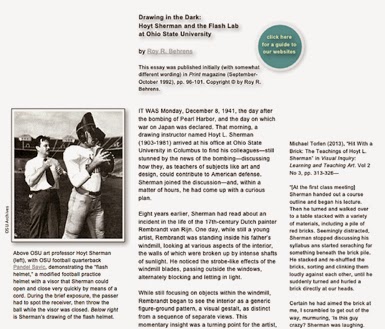 It was Monday, December 8, 1941, the day after the bombing of Pearl Harbor, and the day on which war on Japan was declared. That morning, a drawing instructor named Hoyt L. Sherman (1903-1981) arrived at his office at Ohio State University in Columbus to find his colleagues—still stunned by the news of the bombing—discussing how they, as teachers of subjects like art and design, could contribute to the country's defense. Sherman joined the discussion—and, within a matter of hours, he had come up with a curious plan. more >>>
Posted by Roy R. Behrens at 4:42 PM