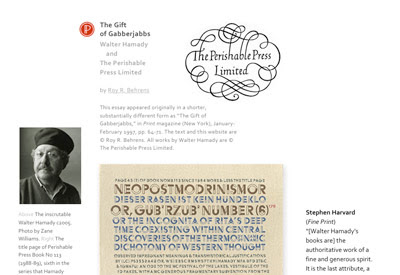 Years ago, a friend of Walter Hamady said (as Hamady himself recalls), "right in front of my mother, 'Walter, you are a bastard!' And my dear sweet mother pulled up bigger than life-size and with huffy indignation said, 'He is not a bastard! I know who his father was and we were married at the time!" more>>
Posted by Roy R. Behrens at 7:34 AM

The likes and many dislikes of Inez McAlister Faber in Out Here on Soap Creek (Ames: Iowa State University Press, 1982), pp. 23-24—

Probably many people wiser than I dislike some of the things I like, such as hoeing, canning, cleaning house, cutting corn fodder, living in the country, being in my thirties, dahlias, roses, meals on time, empty houses with ﬂowers still growing in the yards, old furniture, small boys, books, newspaper editorials, astronomy, chickens, dogs, cows, horses, meat or gravy cooked in a cast-iron skillet, wafﬂes, carrots and spinach. It is quite likely that others, and I have no quarrel with them, like many of the things I hate, including petunias, cats, children who have been taught that they are cute, grown-ups who try to act kiddish, male or female sissies, superiority complexes, machine hemstitching, tablecloths hemmed on the machine, cows with horns, weedy gardens, dwelling houses painted green, rain on washday, so-called living rooms that are only used for company, and overstuffed davenports. Large women in striped or checked dresses, bad table manners, being ﬂatly contradicted, people who handle books roughly or who lay an open book face down upon a table, people who read over my shoulder, inquisitiveness, concrete walks in front of farm homes, fried parsnips, mashed potatoes, interruptions while ironing, washing milk pails, cleaning muddy overshoes, cooking for visitors who do not come, going to bed, getting up, washing yesterdays dishes, and talking over the telephone.
Posted by Roy R. Behrens at 5:22 PM

His talent was as natural as the pattern that was made by the dust on a butterﬂy's wings. At one time he understood it no more than the butterﬂy did and he did not know when it was brushed or marred. Later he became conscious of his damaged wings and of their construction and he learned to think and could not ﬂy anymore because the love of ﬂight was gone and he could only remember when it had been effortless.
Posted by Roy R. Behrens at 1:40 PM

A soldier up for medical exam proved to have been wearing a truss for the last 6 years, and was classiﬁed as P.E. or Permanently Exempt. On his way out he gave this news to his pal, who immediately asked for the loan of the truss, which was granted. The examiner asked how long he had been wearing it, and he said, "Six years," whereupon he was classiﬁed as M.E. "What's that?" he asked. "Middle East." "How can I go to the Middle East when I've been wearing a truss for 6 years?" "If you can wear a truss for 6 years upside-down, you can jolly well ride a camel for 6 months."
Posted by Roy R. Behrens at 5:40 PM

Get To Work | Richard Hugo

Lucky accidents seldom happen to writers who don't work. You will ﬁnd that you may rewrite and rewrite a poem and it never seems quite right. Then a much better poem may come rather fast and you wonder why you bothered with all that work on the earlier poem. Actually, the hard work you do on one poem is put in on all poems. The hard work on the ﬁrst poem is responsible for the sudden ease of the second. If you just sit around waiting for the easy ones, nothing will come. Get to work.
Posted by Roy R. Behrens at 5:28 PM

A couple of times in my life, when I first met in person someone who I had been wanting to meet for years, I became suddenly, atypically tongue-tied. As Edward Marsh describes in his memoir A Number of People (New York: Harper and Brothers, 1939), he had the same experience when he first met the famous journalist and explorer Sir Henry Morton Stanley (as in "Doctor Livingston, I presume") at a party (p. 41)—

At a party of old Mrs. Tennant's he [Stanley] crossed the room to where I was standing forlorn, and said: "I see you're looking neglected, so I've come to talk to you." This well-meant gambit completely froze the genial current of my soul, and neither of us could think of anything further to say.
Posted by Roy R. Behrens at 5:18 PM


Whenever I took our hunting dog, Hussar, for a walk in the open ﬁelds he liked to play a very simple game—the prototype of the most culturally widespread game of human children, escape and pursuit. He would run circles around me at top speed, with his tongue hanging out and his eyes warily watching every move I made, daring me to catch him. Occasionally I would take a lunge, and if I was lucky I got to touch him. Now the interesting part is that whenever I was tired, and moved half-heartedly, Hussar would run much tighter circles, making it relatively easy for me to catch him; on the other hand, if I was in good shape and willing to extend myself, he would enlarge the diameter of his circle. In this way, the difﬁculty of the game was kept contant. With an uncanny sense for the ﬁne balancings of challenges and skills, he would make sure that the game would yield the maximum enjoyment for us both.
[Compare Arthur Koestler's contention (in The Act of Creation) that the value of cryptic communication "is not to obscure the message, but to make it more luminous by compelling the recipient to work it out for himself—to re-create it."]
Posted by Roy R. Behrens at 8:10 AM

Here's the Butter—But Where's the Cat?

There were two neighbors; one of them contended that the other's cat had stolen and eaten ﬁve pounds of his butter; there was a bitter argument and ﬁnally they agreed to seek the advice of the rabbi. They went to the rabbi and the owner of the cat said: "It cannot be, my cat doesn't care for butter at all" but the other insisted that it was his cat and the rabbi said: "Bring me the scales." And they brought the scales and he asked: "How many pounds of butter?" "Five pounds." And believe it or not, the weight of the cat was exactly ﬁve pounds. So the rabbi said: "Now I have the butter, but where is the cat?"
Posted by Roy R. Behrens at 11:16 AM

In 1847 I gave an address at Newton, Massachusetts, before a Teachers' Institute conducted by Horace Mann. My subject was grasshoppers. I passed around a large jar of these insects, and made every teacher take one and hold it while I was speaking. If any one dropped the insect, I stopped till he picked it up. This was at that time a great innovation, and excited much laughter and derision. There can be no true progress in the teaching of natural science until such methods become general.
Posted by Roy R. Behrens at 10:46 AM


[In 1806] Humphrey Howarth, the [Army] surgeon [and Member of Parliament], was called out [challenged to a pistol duel], and made his appearance in the ﬁeld stark naked, to the astonishment of the challenger, who asked him what he meant. "I know," said H., "that if any part of the clothing is carried into the body by a gunshot wound, festering ensues; and therefore I have met you thus." His antagonist declared that, ﬁghting with a man in puris naturalibus would be quite ridiculous; and accordingly they parted without further discussion.
Posted by Roy R. Behrens at 10:20 AM


Dr. [George] Fordyce [a prominent Scottish physician] sometimes drank a good deal at dinner. He was summoned one evening to see a lady patient, when he was more than half-seas-over, and conscious that he was so. Feeling her pulse, and ﬁnding himself unable to count its beats, he muttered, "Drunk by God!"
Next morning, recollecting the circumstance, he was greatly vexed: and just as he was thinking what explanation of his behavior he should offer to the lady, a letter from her was put into his hand. "She too well knew," said the letter, "that he had discovered the unfortunate condition in which she was when he last visited her; and she entreated him to keep the matter secret in consideration of the enclosed (a hundred-pound banknote)."
Posted by Roy R. Behrens at 10:03 AM