Above and below Components from John James Audubon's magnificent Birds of America are reimagined in these commemorative posters by Mallory Thurm, a graphic design student at the University of Northern Iowa.

[In Star Trek, Captain] Kirk is eating pizza in a joint in San Francisco with a woman whose help he will need, when he decides to fess up about who he is and where he has come from. The camera circles the room, then homes in on Kirk and his companion as she bursts out with, "You mean you're from outer space?" "No," says Kirk, "I'm from Iowa. I just work in outer space."

Bouillabaisse is only good because it is made by the French, who, if they cared to try, could produce an excellent and nutritious substitute out of cigar stumps and empty matchboxes.

Above and below Components from John James Audubon's magnificent Birds of America are reimagined in these commemorative posters by Ross Hellman, a graphic design student at the University of Northern Iowa.

I once had a sparrow alight upon my shoulder for a moment while I was hoeing in a village garden, and I felt that I was more distinguished by that circumstance than I should have been by any epaulette I could have worn.

…America is an almost symbolic concentration of all the best and the worst of our civilization. On the one hand, there are its profound commitment to enhancing civil liberty and to maintaining the strength of its democratic institutions, and the fantastic developments in science and technology which have contributed so much to our well-being; on the other, there is the blind worship of perpetual economic growth and consumption, regardless of their destructive impact on the environment, or how subject they are to the dictates of materialism and consumerism, or how they, through the omnipresence of television [and the internet] and advertising, promote uniformity, and banality instead of a respect for human uniqueness.

Above and below Components from John James Audubon's magnificent Birds of America are reimagined in these commemorative posters by Cheyenne Strelow-Varney, a graphic design student at the University of Northern Iowa.

Sir Humphrey Davy
Abominated gravy.
He lived in the odium
Of having discovered sodium.

George the Third
Ought never to have occurred
One can only wonder
At so grotesque a blunder.

Above and below Components from John James Audubon's magnificent Birds of America are reimagined in these commemorative posters by Hanna Seggerman, a graphic design student at the University of Northern Iowa.

Samuel Foote [nonsense text devised to test the claim of actor Charles Macklin that he could memorize anything] quoted in Maria Edgeworth, Harry and Lucy Concluded. New York: Harper and Borthers, 1842, p. 315—

So she went into the garden to cut a cabbage leaf; to make an apple pie; and at the same time a great she-bear, coming up the street, pops its head into the shop. What! no soap? So he died, and she very imprudently married the barber; and there were present the Picninnies, and the Joblillies, and the Garyalies, and the grand Panjandrum himself, with the little round button at top, and they all fell to playing the game of catch as catch can, till the gun powder ran out at the heels of their boots.

Published information about the origins of collage is misleading. Picasso and Braque are credited with inventing it. Many artists made collage before they did, Picasso's father for one and Sonia Delaunay for another.

When you ask children what they want to be when they grow up, they don't say, "I want a boring job where the only thing I look forward to is Friday."
Posted by Roy R. Behrens at 10:20 AM

Above and below Components from John James Audubon's magnificent Birds of America are reimagined in these commemorative posters by Charles Williams, a graphic design student at the University of Northern Iowa.

Things are always best seen when they are a trifle mixed-up, a trifle disordered; the chilly administrative neatness of museums and filing cases, of statistics and cemeteries, is an inhuman and antinatural kind of order; it is, in a word, disorder. True order belongs to Nature, which never yet has produced two identical trees or mountains or horses.

We used to think that if we knew one, we knew two, because one and one are two. We are finding that we must learn a great deal more about "and." 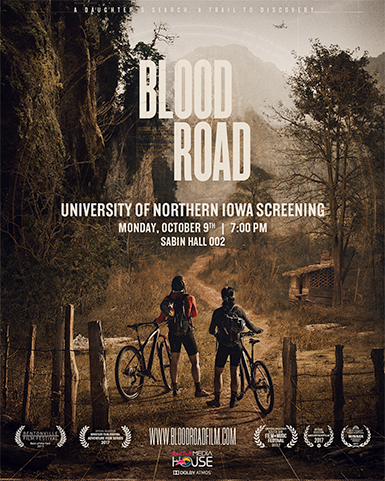 It was in October 2015 that one of our most accomplished graphic design alumni, Red Bull filmmaker Nick Schrunk, returned to the University of Northern Iowa to meet with current students. His talk was a great success, the semester's high point. As his former teachers, we are both proud and appreciative of his remarkable achievements.

Among the things he shared with us were in-process insights into the production of his first feature film, titled BLOOD ROAD. A powerful documentary on a mountain bike retracing of 1,200 miles of the Ho Chi Minh Trail (an 8-week endurance trek) in Vietnam, it was released earlier this year, to awards and wide acclaim. The official trailer is on YouTube, and the film itself is available online through Amazon Video, YouTube, Google, iTunes and other sources.

The two mountain bikers in the film are American athlete Rebecca Rusch and her Vietnamese riding partner, Huyen Nguyen. Part of Rusch's motivation was to try to locate the site where her father (a US Air Force pilot) was fatally shot down some forty years ago in Laos.

In a few days, Nick Schrunk is returning to the UNI campus again, this time to screen the finished film, to reflect on film production, and to revisit the painful reminders of the Vietnam War (survivors are still being injured or killed by buried explosives and the enduring effects of chemical defoliants).

The timing of this could hardly be more opportune, since Nick's visit to campus follows by a week or two the premiere of Ken Burns' new, ten-part PBS documentary on the horrid consequences of that war, and the increasing likelihood that we and other countries have and will continue to engage in comparable atrocities. It is especially critical for younger, current Americans—those who did not witness the war—to be aware of the damage that governments do.

The screening of BLOOD ROAD is free and open to the public. It will take place on Monday, October 9 in Sabin Hall Room 002 on the UNI campus. Despite what it says on the poster, the starting time is 7:30, not 7:00.

Above and below Components from John James Audubon's magnificent Birds of America are reimagined in these commemorative posters by Sophia Grover, a graphic design student at the University of Northern Iowa.

"The great field for new discoveries," wrote William James, "is always the unclassified residuum. Round about the accredited and orderly facts of every science there ever flows a sort of dust-cloud of exceptional observations, of occurrences minute and irregular and seldom met with, which it always proves more easy to ignore than to attend to." The genius of Sherlock Holmes manifested itself in shifting his attention to minute clues which poor Watson found too obvious to be relevant, and so easy to ignore. The psychiatrist obtains his clues from the casual remark, the seemingly irrelevant drift of associations; and he has learned to shift the emphasis from the patient's meaningful statements to his meaningless slips of the tongue, from his rational experiences to his irrational dreams. [It is] the trick which [Edgar Allan] Poe's character empolyed when he let the secret document lie open on his desk—where it was too obvious to be seen.

Above and below Reinterpretations, in poster form, of John James Audubon's The Birds of America, designed by Colton Ellison, graphic design student at the University of Northern Iowa (2017).

Ireland was something new to Mariette and obliged her by appearing very Irish. A local peasant girl, who had been engaged to do the work, turned out delightfully incompetent and committed all the Irishisms beloved by English humorists. When told to clean a pair of shoes she asked "Do you mean both of them?" and when sent up to a bedroom with a hot-water bottle she would hang it on the knob of a chair. There were three itinerant butchers who visited the house in rotation and sold us whole sides of sheep. And when I walked along the road with my arm around Mariette, an old woman called out, "That's a grand way for a girl to be—linked to a boy."

…One day Mariette and I drove across the island to buy lobsters. The fishermen had only a dozen which they had contracted to send to the mainland, but Mariette's Mediterranean persuasiveness was too much for them and one of them gave us two lobsters, saying to his colleague who was in charge of the box for the mainland, "Throw in a couple of herring; they're all fish." The lobsters sat on the back seat and clacked their claws like castanets as we drove home.