Above Layout for a calendar page (its theme determined by a quote) by Dana Potter, graphic design student, Department of Art, University of Northern Iowa.

George Carlin, in an interview in David Jay Brown, Conversations on the Edge of the Apocalypse (NY: Palgrave Macmillan, 2005), p. 191—

We're given many choices to distract us from the fact that our real choices have been diminished in number. Two political parties. Maybe three or four large banks now. Credit card companies, just a couple, a handful. Newspapers, reduced. Ownership of media, reduced, down to five or six companies now. Big stock brokerage firms, reduced in number. In all of these important things we have less choice. Then we're distracted with these frivolous choices: 21 flavors of ice cream, 35 flavors of popcorn. You see specialty shops with 35 flavors of popcorn, like chocolate walnut popcorn. These are absurd distractions from what we are doing to ourselves…
Posted by Roy R. Behrens at 5:56 PM

Above Layout for a calendar page (its theme determined by a quote) by Rob Bauer, graphic design student in the Department of Art, University of Northern Iowa.

After my father's bypass surgery, he felt so dreadful that he insisted his doctor stop most of his medication. Thereafter, he felt fine. While such a drastic action is not everyone's cup of tea, you would have to know my father to appreciate how relentlessly stubborn he was. He claimed to have "accurately misunderstood" his doctors, didn't want them to put [all] his "aches in one basket," was fearful of "dying for nothing," and wished as an adult to be "the blind leading the blonde."

[The poet W.H. Auden] says that in the train club car on his way to lecture at Yale, some students sent him a note: "We can't stand it a minute longer: are you Carl Sandburg?" He wrote back: "You have spoiled mother's day."
Posted by Roy R. Behrens at 3:37 PM 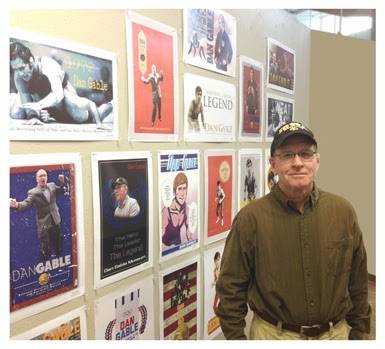 Above are installation views of about eighty posters currently on display at the National Wrestling Hall of Fame and Dan Gable Museum at 303 Jefferson Street in Waterloo IA. As explained in earlier posts, these posters were produced by undergraduate students in a beginning course in graphic design, in the Department of Art at the University Northern Iowa. They commemorate the achievements (as both a wrestler and a coach) of Iowa-born Olympic wrestler Dan Gable, shown here in a recent photo (by museum director Kyle Klingman), when he stopped by to see the posters.
Posted by Roy R. Behrens at 10:58 AM