people tell me one thing and out the other

[There are two types of scientists:] bumblers, who plod along, only once in a while accomplishing something but enjoying the process even if they often end up being wrong, and the pointers, who do only one thing: point out that the bumblers are bumbling.

People tell me one thing and out the other. I feel as much like I did yesterday as I did today. I never liked room temperature. My throat is closer than it seems. Likes and dislikes are among my favorites. No napkin is sanitary enough for me. I don’t like any of my loved ones.

Habitualization devours works, clothes, furniture, ones wife, and the fear of war…And art exists that one may recover the sensation of life; it exists to make one feel things, to make the stone stony. The purpose of art is to impart the sensation of things as they are perceived and not as they are known. The technique of art is to make objects “unfamiliar,” to make forms difficult, to increase the difficulty and length of perception because the process of perception is an esthetic end in itself and must be prolonged. Art is a way of experiencing the artfulness of an object, the object is not important.

Well, sir, we left New York drunk and early on the morning of February second. After fifteen days on the water and six on the boat, we finally arrived on the shores of Africa. The first morning saw us up at six, breakfasted and back in bed at seven. This was our routine for the first three months. We finally got so we were in bed at six-thirty. The principal animals inhabiting the African jungle are moose, elks and Knights of Pythias. Of course, you know what a moose is. That's big game. The first day, I shot two bucks. That was the biggest game we had...The elks, on the other hand, live up in the hills, and in the spring they come down for their annual convention. It is very interesting to see them come to the water hole. What they’re looking for is an elkahole. One morning I shot an elephant in my pajamas. How he got in my pajamas, I don't know. Then we tried to remove the tusks, but they were embedded in so firmly that we couldn’t budge them. Of course, in Alabama, the Tuskaloosa. But that's entirely errelephant to what I was talking about. We took some pictures of the native girls, but they weren't developed; but we’re going back in a couple of weeks.

Er, er, that was “Lift Up Your Socks”…Next week, “A Short Gap” recorded anonymously…the South of England is going to move in a westerly direction…Now here is a police message, published Methuen at twenty-one shillings. There was an accident last night on the Great North Circular Road, when an elderly chrysanthemum was knocked down by a steamroller and received injuries from which the Chief Constable of Hertfordshire has since died…The police are anxious to interview a man with long blue hair—they have never seen a man with long blue hair.

Kate Bassett [in reference to the above radio script] In Two Minds: A biography of Jonathan Miller. London: Oberon Books, 2012, p. 55—

What is remarkable, more immediately, is this extract’s sheer craziness. It is garbled, elided and dreamlike, with slivers of the everyday made strange by being miscategorized, everything playfully grafted into the wrong slots. Miller’s own theory of comedy, expounded in later life, would home in on precisely that: laughter aroused by errors of classification.

if you want to see the sisters in their wimples

If you want to see the sisters in their wimples with the pimples on their dimples, making laces for the faces of the acolytes in surplices, with purples for the trimmings of the cassocks of the canons of the bishop of the diocese of Fond du Lac—you’re too late! They just passed by.

a crow crowd in the morning and made a noise

What is a double petunia? A petunia is a flower like a begonia. A begonia is a meat like a sausage. A sausage-and-battery is a crime. Monkeys crime trees. Tree’s a crowd. A crow crowd in the morning and made a noise. A noise is on your face between your eyes. Eyes is the opposite of nays. A colt nays. You go to bed with a colt, and wake up in the morning with a case of double petunia. 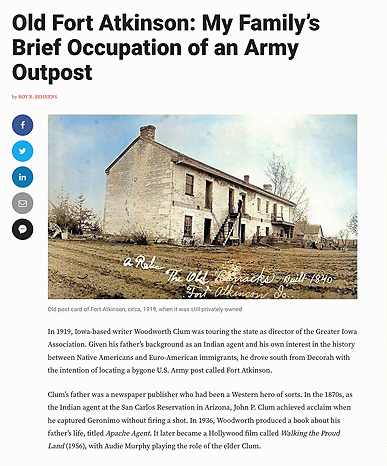 Above online version of article in The Iowa Source

In an essay / memoir in the current issue (June 2021) of The Iowa Source magazine (Fairfield IA), I recall the story of the death of my paternal grandfather, Diedrich Joseph Behrens, an Iowa farmer, in 1918, in a harvesting machinery accident. My father, who was 17 that year, was the oldest of seven children. It was the third in a series of crop failures, and my grandmother was penniless. She could no longer lease the farm, and she and her children survived for the next year and a half by living in the ruins of an old US Army outpost, known as Fort Atkinson in northeast Iowa.