Catacombs of the Capuchins in Palermo, Italy 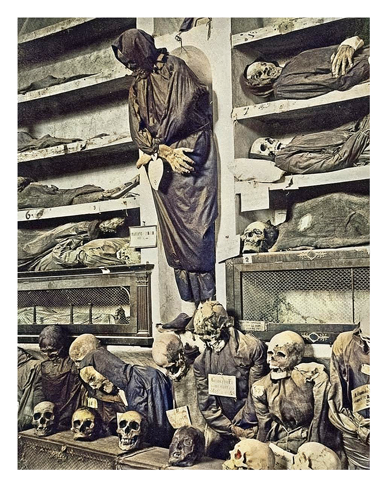 Patrick Brydone, A Tour through Sicily and Malta: in a series of letters to William Beckford, Esq., of Somerly in Suffolk, from P. Brydone, F.R.S., 1773. English Edition: New York: Evert Duyckink, 1813—
This morning we went to see a celebrated convent of Capuchins, about a mile without the city; it contains nothing very remarkable but the burial place, which indeed is a great curiosity. This is a vast subterraneous apartment, divided into large commodious galleries, the walls on each side of which are hollowed into a variety of niches, as if intended for a great collection of statues; these niches, instead of statues, are all filled with dead bodies, set upright upon their legs, and fixed by the back to the inside of the niche: their number is about three hundred: they are all dressed in the clothes they usually wore, and form a most respectable and venerable assembly. The skin and muscles, by a certain preparation, become as dry and hard as a piece of stock-fish; and although many of them have been here upwards of two hundred and fifty years, yet none are reduced to skeletons; the muscles, indeed, in some appear to be a good deal more shrunk than in others; probably because these persons had been more extenuated at the time of their death.

Here the people of Palermo pay daily visits to their deceased friends, and recall with pleasure and regret the scenes of their past life: here they familiarize themselves with their future state, and choose the company they would wish to keep in the other world. It is a common thing to make choice of their niche, and to try if their body fits it, that no alterations may be necessary after they are dead; and sometimes, by way of a voluntary penance, they accustom themselves to stand for hours in these niches… 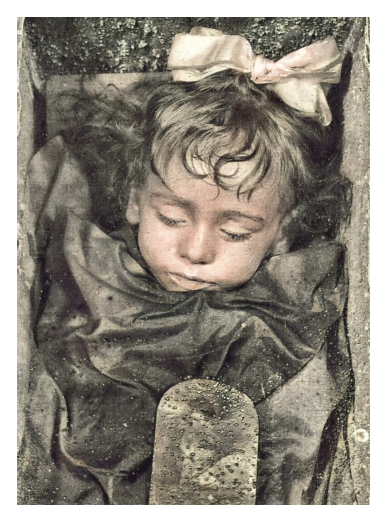 I am not sure if this is not a better method of disposing of the dead than ours. These visits must prove admirable lessons of humility; and I assure you, they are not such objects of horror as you would imagine: they are said, even for ages after death, to retain a strong likeness to what they were when alive; so that, as soon as you have conquered the first feeling excited by these venerable figures, you only consider this as a vast gallery of original portraits, drawn after the life, by the most just and unprejudiced hand. It must be owned that the colors are rather faded; and the pencil does not appear to have been the most flattering in the world; but no matter, it is the pencil of truth, and not of a mercenary, who only wants to please. 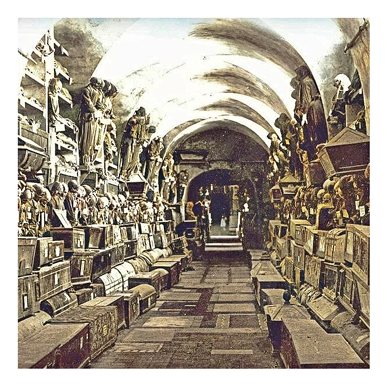 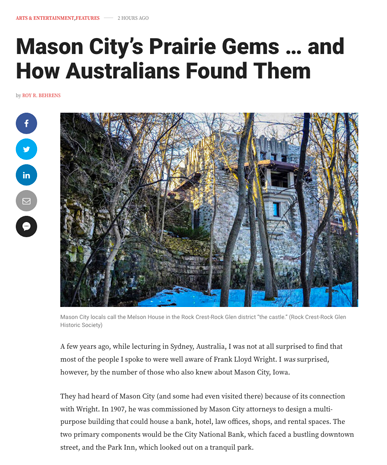 The senescent departure of Emerson's life

The last time I saw Mr. [Ralph Waldo] Emerson was in 1879 [three years prior to Emerson’s death]. I was in my twenty-seventh year, had just returned from California, and was spending some time in Concord [MA] before going abroad. Charles H. Davis, the painter, was visiting me at the Old Manse, and we both went over and supped with him. He seemed much older, but was still that example of perfect serenity I had known as a boy. His memory was beginning to fail him, which made him a bit querulous, but his daughter Ellen supplied it whenever she could. For example, he forgot that he had ever seen Tom Taylor's tribute, or apology, to Lincoln, in Punch—in spite of the fact that it is included in the Parnassus [Emerson’s own anthology of poetry] and read it to us, at my request, with astonishment and delight. He read beautifully. and his voice retained all of its old hypnotic quality.

While his memory failed in the detail of names and places, he still retained, in most cases, his fascinating mode of expression, and the process of thought was still there. He said the night Davis and I were there—

"Last week, it was the day…the day that…who was it was here? Ellen, can you remember? Oh! It was our religious friend." He referred to [John Greenleaf] Whittier.

He asked, upon going out for a walk, "Where is that thing everybody borrows and no one ever returns.” He meant an umbrella and had forgotten the name.

This story was told me by my mother. They knew (the women) that opinion of [Henry Wadsworth] Longfellow was the same as theirs—the Bromides—and that the two men, of course, loved and admired each other—which they did not. Of course, Mr. Emerson must go to the funeral of the poet. Accordingly. the poor man was pulled up, himself more dead than alive [Emerson would die one month later], and brought down to Cambridge. He sat at the church, seemingly unconscious of the raison d’etre of it all. Then he rose (holding on to his coattails was not effective) and joined the procession about the body.

On crossing the Cambridge Common later, he suddenly stopped, faced around toward the church, and then looking at them, said:

"I do not remember the name of our friend we have just buried, but he had a beautiful soul."

In some people, the loss of memory can be a blessed thing.

After a while she [author Louisa May Alcott, a close friend of Emerson] said; "Now I shall put on my coat and hat, and we shall walk over to Emerson’s house. I am almost afraid to promise that you will see him. He sees scarcely anyone now. He is feeble, and—“ She did not finish the sentence."But we'll walk over there, at any rate.”

Presently they reached Emerson's house. and Miss [Ellen] Emerson [his daughter] welcomed them at the door. After a brief chat, Miss Alcott told of the boy's [Bok’s reference to himself] hope. Miss Emerson shook her head.

"Father sees no one now," she said, "and I fear it might not be a pleasure if you did see him. “

She had scarcely left the room when Miss Alcott rose and followed her, saying to the boy, "You shall see Mr. Emerson if it is at all possible."

The boy followed her through two rooms, and at the threshold of the third Miss Emerson stood, also with moistened eyes.

"Father," she said simply, and there, at his desk, sat Emerson—the man whose words had already won Edward Bok's boyish interest, and who was destined to impress himself upon his life more deeply than any other writer.

Slowly, at the daughter's spoken word, Emerson rose with a wonderful quiet dignity, extended his hand, and as the boy's hand rested in his, looked him full in the eyes.

No light of welcome came from those sad yet tender eyes. The boy closed upon the hand in his with a loving pressure, and for a single moment the eyelids rose, a different look came into those eyes, and Edward felt a slight, perceptible response of the hand. But that was all!

Quietly he motioned the boy to a chair beside the desk. Edward sat down and was about to say something, when, instead of seating himself, Emerson walked away to the window and stood there softly whistling and looking out as if there were no one in the room. Edward's eyes had followed Emerson's every footstep. when the boy was aroused by hearing a suppressed sob, and as he looked around he saw that it came from Miss Emerson. Slowly she walked out of the room. The boy looked at Miss Alcott, and she put her finger to her mouth, indicating silence. He was nonplussed.

Edward looked toward Emerson standing in that window, and wondered what it all meant. Presently Emerson Ieft the window and, crossing the room, came to his desk, bowing to the boy as he passed, and seated himself, not speaking a word and ignoring the presence of the two persons in the room.

Suddenly the boy heard Miss Alcott say: "Have you read this new book by [John] Ruskin yet?"

Slowly the great master of thought lifted his eyes from his desk, turned toward the speaker, rose with stately courtesy from his chair, and, bowing to Miss Alcott, said with great deliberation: "Did you speak to me, madam?"

The boy was dumbfounded! Louisa Alcott, his Louisa! And he did not know her! Suddenly the whole sad truth flashed upon the boy. Tears sprang into Miss Alcott's eyes, and she walked to the other side of the room. The boy did not know what to say or do, so he sat silent. With a deliberate movement Emerson resumed his seat, and slowly his eyes roamed over the boy sitting at the side of the desk.…

For a moment he groped among letters and papers, and then, softly closing the drawer, he began that ominous low whistle once more, looked inquiringly at each, and dropped his eyes straightway to the papers before him on his desk. It was to be only for a few moments, then! Miss Alcott turned away.

The boy felt the interview could not last much longer. So, anxious to have some personal souvenir of the meeting, he said: "Mr. Emerson, will you be so good as to write your name in this book for me?" and he brought out an album he had in his pocket.

But the sound of the name brought no response from the eyes.

"Please write out the name you want," he said finally, "and I will copy it for you if I can."

It was hard for the boy to believe his own senses. But picking up a pen he wrote: "Ralph Waldo Emerson, Concord; November 22, 1881.”

Emerson looked at it, and said mournfully: “'Thank you." Then he picked up the pen, and writing the single letter "R" stopped, followed his finger until it reached the "W" of Waldo, and studiously copied letter by letter! At the word “Concord" he seemed to hesitate, as if the task were too great, but finally copied again, letter by letter, until the second "e" was reached. "Another ‘0,'" he said, and interpolated an extra letter "—in the name of the town which he had done so much to make famous the world over. When he had finished he handed back the book, in which there was written:

The boy put the book into his pocket; and as he did so Emerson's eye caught the slip on his desk, in the boy's handwriting, and. with a smile of absolute enlightenment, he turned and said:

"You wish me to write my name? With pleasure. Have you a book with you?"

Overcome with astonishment, Edward mechanically handed him the album once more from his pocket. Quickly turning over the leaves, Emerson picked up the pen, and pushing aside the slip, wrote without a moment's hesitation:

The boy was almost dazed at the instantaneous transformation in the man!

Miss Alcott now grasped this moment to say: “Well, we must be going!"

"So soon?" said Emerson, rising and smiling. Then turning to Miss Alcott he said: "It was very kind of you, Louisa, to run over this morning and bring your young friend."

Then turning to the boy he said: "Thank you so much for coming to see me. You must come over again while you are with the Alcotts. Good morning! Isn't it a beautiful day out?" he said, and as he shook the boy's hand there was a warm grasp in it, the fingers closed around those of the boy, and as Edward looked into those deep eyes they twinkled and smiled back.