A few hours after I arrived at Taliesin [in 1954] we dined with others outside under a large tree. Flies, for some reason, were prolific on this warm spring day. [Frank Lloyd] Wright remedied this annoyance by having a fly swatter next to his chair. As a fly landed, he would pick up the swatter and take precise aim. "That's [Walter] Gropius," he jovially exclaimed, and then he would take aim again at another unsuspecting fly. "And that's [Le] Corbusier," he would add, until dead flies littered the table and he had struck down the so-called hierarchy of modern architecture.

Soon after his arrival in the U.S., a young German architect named Richard Neutra was walking through the neighborhoods of the Hyde Park area of Chicago, looking for Prairie School houses.

Earlier, in a European library, he had seen the Wasmuth Portfolio, an album of early buildings by American architect Frank Lloyd Wright. Now, he had come to Chicago to search for one of Wright’s most admired designs, the famous Frederick C. Robie House on Woodlawn Avenue.

Standing at last in the presence of the Robie House, Neutra was infused with emotion. He rang the doorbell and asked in broken English, “Is Mr. Robie in?” The present owner, who answered the door, replied, “Mr. Robie? Never heard of him.” There had been a succession of owners, and she had bought the house, she explained, because it was “very cheap” and the previous owner “had to get out.” She didn’t particularly like its design, Neutra recalled, and “had all kinds of petty criticisms.”

In his autobiography, Neutra recalled that this happened repeatedly as he visited famous American buildings, well-known and admired by European architects. Inevitably, he found that the current residents (and their neighbors) had little or no understanding of the importance of the buildings that surrounded them. He was overtaken by what he described as a “sad wonderment.”

“I had arrived in fairyland,” he said, “but the fairies had gone. And the occupants of the enchanted forest looked entirely inconsistent and contradictory to what their setting called for. I was downcast, broken, and puzzled.”

Later, when Neutra actually met Frank Lloyd Wright, he told him how surprised he was that Chicago’s Prairie School houses were not surrounded by prairie. When those homes were built, he asked, were they then in the prairie?

“No,” Wright answered, “there was no prairie…but it was the spirit of the prairie that was recaptured with it and in it.”

• Design by Roy R. Behrens, using public domain portrait photograph (colorized) of Wright (c1926), from Library of Congress Prints and Photographs, and a photograph of the Stockman House by Pamela V. White (2007), from Creative Commons, Wikipedia.
Posted by Roy R. Behrens at 10:48 AM

As for resembling life forms [in architecture], it is underlying pattern, not any literal representation that makes a building "come alive." Trees, which populate the landscape much as buildings do, are much more generally considered to be beautiful. But, as Frank Lloyd Wright said, a building should be like a tree, not look like a tree…Trees and people contain the same kinds of patterns. Harmonious buildings that embody life forms refer to us, they are about us. That is why we are so attracted to them.

Harmony can be defined as the resonating play of shapes. It can be gentle or strong, but it is not immobility. The old way of seeing is not repose, and it is not prettiness. It might be soft or rough. It might be cheap…or it might be the Great Pyramid, but the same design principles will guide it. Harmony in a building means relationships that work with other relationships.…

One of the purposes of ornament is to pull the eye toward the regulating lines of a building, to point out the key visual points of its geometry. Ornament strengthens the forms that are already there. The powerful governing patterns of the buildings are not decorative, they are the architecture. They are inherent in the building, just as what the building does is inherent in it: this building is a house, and it also embodies this pattern. To be a pattern if one of the building's functions. In this way a building is like music.
Posted by Roy R. Behrens at 2:57 PM

[This book is] A masterly detailed romp (staccato vivace) through the cultural and architectural history of the persons, structures, and interrelations emergent along the 1908-1911 timeline in Mason City, Iowa. Although the City National Bank, Park Inn, and Stockman residence by Frank Lloyd Wright are central, equal attention is given to the Rock Crest/Rock Glen residences actuated by the "Griffins," Byrne, Blythe, Broaten, Drummond, and Besinger. Instructive insights into the principles of design, essences of organic logic, and exposed peccadillos (good and not so) of the chief actors pleasantly compliment the illustrative architectural heart of the once prairie village. A five-star read (romp) indeed.
Posted by Roy R. Behrens at 4:53 PM

Above Good news, believe it or not, on a day of infamy. Opening today at the Minneapolis College of Art and Design is a powerful exhibition of satirical political art. Curated by legendary art director Patrick JB Flynn of the Madison-based THE FLYNSTITUTE, the exhibition is ANOTHER VOICE: Political Illustration of the Late 20th Century. Don't miss the opening this evening, with a curator's talk and a panel exchange in early February. Poster illustration above is by Henrik Drescher © 1985 from The Progressive. For more information see Another Voice.

We had a maid named Betsy, a fat elderly woman who might have been made amusing by [Charles] Dickens; for it was she who, when the groceries came home one day, horrified the entire family by clapping a vinegar bottle to her lips, drinking with zest, and, as she set it down, exclaiming: "I do LOVE winnidar!"

[At a certain dinner during World War I] Vanessa [Bell, sister of Virginia Woolf] was put beside Mr. [H.H.] Asquith, then Prime Minister and a man with many burdens, including the conduct of the war. Vanessa rarely read a newspaper in those days, though she was always interested in picture papers…which might suggest subjects for picture. She had missed Mr. Asquith's name, but his face was almost intolerably familiar to her…Yet she could not place him. Giving him the smile of an innocent but daring child, she risked the remark:

Vanessa's best remarks were like that, experimental and haphazard shots in the dark. When she coined an epigram it was often because she had forgotten a cliché.

"In that house you meet a dark horse in every cupboard," she once exclaimed with some indignation. And of Maynard [Keynes]: "It runs off his back like duck's water." But of all her sayings the most withering was: "Ah, that will be canker to his worm."
Posted by Roy R. Behrens at 9:01 AM

The Man Who Mistook Someone's Hat For His 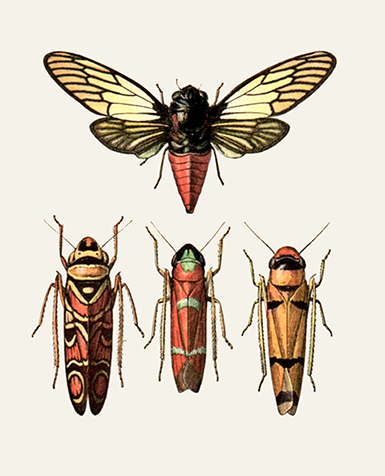 He [a co-worker named Martin, who was the company cashier] had a very large round head, upon which he wore a great dusty bowler hat; and one Saturday, when everybody but myself had gone home, I was dismayed to find that he had taken my hat and left this monster [his hat] behind. Despair grew when it dawned upon me that the hat came down to my chin. But at last I recollected that Martin was most likely to be found in a local pub, and set out in search of him as Cockney wives sometimes go on Saturday nights in search of their husbands, opening swing doors and quickly scanning the faces in the bar.

My search was brief. He was sitting on a tall stool in the center of the saloon bar of the Essex Serpent, in King Street. In his outstretched arms was a newspaper; a pipe was held firmly in his front teeth; and high upon his big white head, looking in its inadequacy like a thimble, was perched my little hat. I removed it firmly; and Martin was very annoyed, first with me for entering a pub at all, second with himself for having taken my hat, and finally again with me for knowing where he was to be found. Poor man, his life was a misery.

Note We will add this to our ever expanding collection of stories about those who have mistaken someone else's hat (or other item of clothing) for their own. Go here, for example, for another hat confusion tale by British philosopher Alfred North Whitehead, or here for Mircea Eliade's story about walking off with Claude Lévi-Strauss' raincoat.
Posted by Roy R. Behrens at 6:49 PM

Above and below Baby hummingbirds in nest in Mexico a few weeks ago, as photographed by artist Craig Ede (sounds like tweed), long-time friend and schoolmate.

After living elsewhere for almost two decades, in 1990 I moved back to Iowa, where I had been born and raised. Soon after, as I browsed in a second-hand bookstore, I was surprised and delighted to find a paperback volume of essays by American satirist H.L. Mencken. Even as a high school student, I had read nearly all his writings, and had purchased at the time a series of Vintage paperbacks, the covers of which had been designed by graphic designer Paul Rand. It was one of the books from that series that I suddenly found on the shelf in that store. I felt a surge of nostalgia as I reached for the book; it was not only a touchstone, it was the exact same edition as well. Imagine my greater astonishment when, seconds later, as I turned to the flyleaf—I found my own signature.

I recalled this recently while reading the memoirs of British writer Richard Aldington, titled Life for Life's Sake (New York: Viking, 1941). Although the circumstances were different, I thought of my own experience as he described what happened to him when he returned to London after serving in World War I (pp. 202-203)—

[In a London bookstore] A little further down was a display of French books. One shelf of about forty particularly held my attention. I thought: This is a remarkable coincidence; it's the first time in my life I've ever seen a row of second-hand books, every one of which I've read. Mechanically I pulled down one of them and opened it. On the flyleaf was written: Richard Aldington. I took down another, with the same result.

My first thought was that the house where I had stored my books had been burgled; and full of righteous indignation I plunged into the shop to try to trace the thief. Again the bookseller remembered me, and at once looked up his records. If I had suddenly and unexpectedly been hit between the eyes I could not have been more stunned than when I learned the books had been sold by a "friend," a Bloomsbury intellectual, who had rooms in the house and therefore access to the storeroom. Evidently he had come to the conclusion that I was unlikely to return from the front, and that since the books were no use to him he might as well change them into beer.

My French colleague, Henry de Montherlant, making a pilgrimage of devotion to the sacred field of [the Battle of] Verdun, found skulls of our dead comrades on which tourists had scratched their names and the initials of their country.

Rex Beach, Personal Exposures (New York: Harper and Brothers, 1940), p. 166 [his recollection of having been attacked by a huge crocodile while making a wildlife film]—

To this day it gives me a chill to see an alligator-hide suitcase with the lid open. I don't trust those creatures even when they have brass fittings and a monogram.