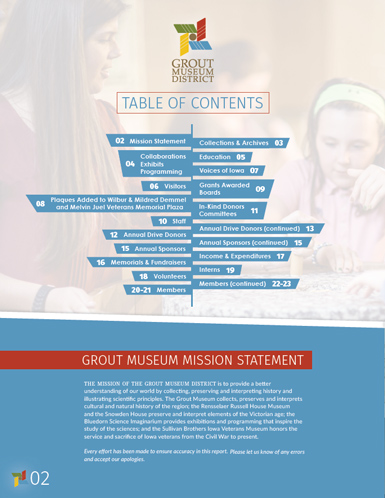 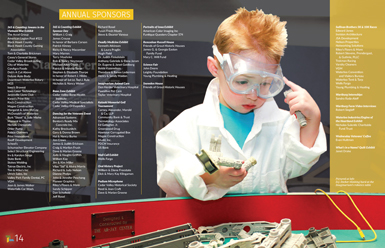 A hearty congratulations to Rachael Bair, current graphic design student, Department of Art at the University of Northern Iowa, for her design of the Annual Report for Fiscal Year 2014-2015 for the Grout Museum District (Waterloo IA). Rachael completed the project while working as an intern with Jacquie Colvin (former UNI student designer), who is now that organization's marketing coordinator and graphic designer. As confirmed by the sample pages above and below on this blog post, it's really an excellent layout, by one of our most extraordinary students. The entire annual report is also available online as a pdf.

Earlier this year, Rachael earned another distinction when one of her woodcut illustrations, titled Carry a Light with You, received a Best of Category Award at the annual competition by the Art Directors Association of Iowa (ADAI). This was just the latest in the ever-growing list of Rachael's well-deserved graphic design prizes. 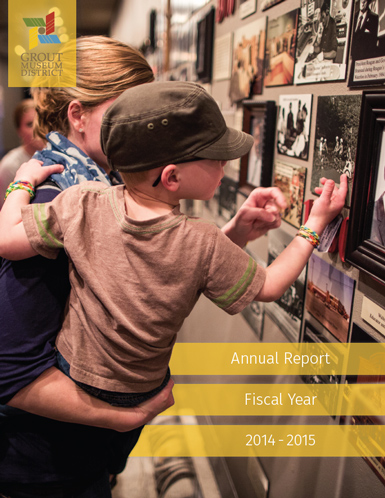 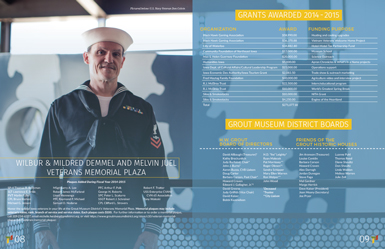 Above Last semester in the Department of Art at the University of Northern Iowa, students in a course about the history of modern design (graphic, industrial and architectural) were assigned a major end-of-term project. They chose a research subject from the widest range of possibilities, with the aim of producing a formal research paper, an illustrated booklet, an information graphic (such as a chronological chart), and so on. The results were impressive to say the least. Among the finest was an exactly written and designed 32-page booklet on "the evolution of space suits in fiction and reality," produced by senior graphic designer Austin Montelius. The printed cover is above, with one of the opening spreads below. It was both flawless and ambitious, an admirable achievement in every regard.

The history of space exploration is one of Austin's many interests. He is especially knowledgeable of the development of the Russian space program, which he used as the subject for a stunning chronological chart which he designed for an earlier studio class (see below).