Cousin Sally wanted an air conditioner, so she went into Metter [Georgia] to buy one, and they said: "Miss Sally, what size you want?"

They said, "Well how many BTUs do you want?"

She said, "I don't know a thing in the world about BTUs. All I know is I want an air conditioner with enough BTUs to cool a b-u-t-t as big as a t-u-b." She was really large.

…I laughed when he [Mr. Young, an old carpenter who worked with him in Maine] told me of “the big fat lady over on the main” for whom he was building a privy. “Now you be sure and make it big enough,” sez she. Said Mr. Young: “Lady, you set right down there and I’ll mark her ‘round.”

Bewilderness | Joyce and the National Parks 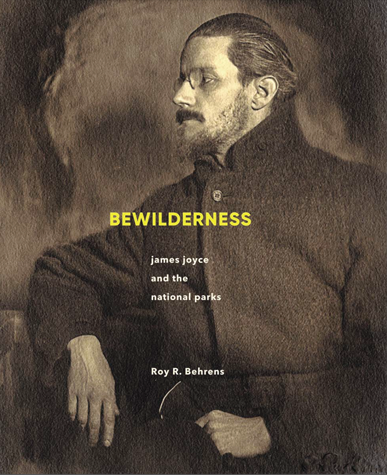 Above Cover of Bewilderness: James Joyce and the National Parks (Bobolink Books, 2020) with posters by Roy R. Behrens, juxtaposed with passages from Joyce's Finnegans Wake. 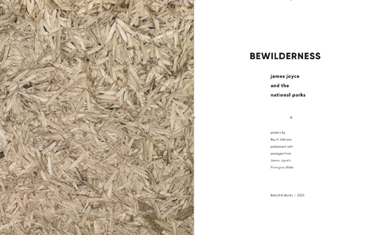 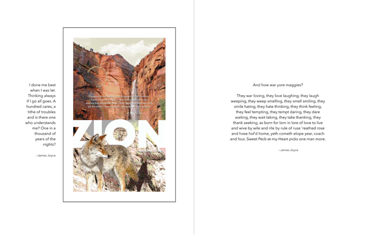 Flu pandemic and quackery in Iowa in 1918

[Jessie in Postville, Iowa, writing to Anne in Minneapolis, October 28, 1918, in reference to the Spanish flu pandemic] . . . Hope you and the children got there safely. Helen got ill just after you left. It seems to be a recurrence. She had it awfully hard last year. I’m keeping her out of school. So far the rest of us have been spared. We keep hearing wild rumors. One is that some doctors and nurses at Camp Dodge outside Des Moines were caught injecting flu germs into patients and were court-martialed and shot. Another is that fifty black soldiers who died of flu were buried in a mass grave behind the hospital. Who can be believed? Dad says none of it's true but that so many of the young boys who got drafted and are down at Camp Dodge are sick and going overseas. One of the fellows we knew died of flu on his way to France and had to be buried at sea. Liquor is outlawed here, but the police will issue medicinal whiskey permits if Doc Schmidt signs them. No more than a quart and the man is watched. Doc Schmidt got hold of what he calls “pneumonia serum.” He told Papa, “I don't know if it's any good, but c'mon over and I'll give you a shot.” So he went. I tried a new medicine, “Vick's Vaporub,” with Helen. Folks have been trying just about anything—onions, kerosene, Hicks tablets, mustard poultices, lemon juice, turpentine, linament. Papa had me make up some little cheesecloth breath strainers. But there's plenty of quackery…
Posted by Roy R. Behrens at 11:06 AM

Above Magazine cover illustration for the October 1916 issue of Good Housekeeping by Coles Phillips (1880-1927). As shown in this example, he was especially known for paintings in which edges of the figure merge with the background. Tragically, he died of tuberculosis at the early age of 47. We reproduced another work of his in an earlier blog post.

I was once walking with him [Henry James] and Mr. John Galsworthy…[whose] dachshund Maximilian ran sheep, so, not to curtail the animal’s exercise, the Master had provided it with a leash at least ten yards long. Mr. Galsworthy and I walked one on each side of James listening obediently while he talked. In order to round off an immense sentence the great man halted…He planted his [walking] stick firmly into the ground and went on and on and on. Maximilian passed between our six legs again and again, threading his leash behind him. Mr. Galsworthy and I stood silent. In any case we must have resembled the Laocöon, but when Maximilian had finished the resemblance must have been overwhelming. The Master finished his reflections, attempted to hurry on, found that impossible. Then we liberated ourselves with difficulty. He turned on me, his eyes fairly blazing, lifting his cane on high and slamming it into the ground: “H…” he exclaimed, “you are painfully young, but at no more than the age to which you have attained, the playing of such tricks is an imbecility! An im…be…cility!”