…above all, and forever dear to my thoughts, there was Rosa, our young nurse from Austria. It was Rosa who dressed me in the morning and put me to bed at night. It was Rosa who taught me to say my prayers, and to believe in them…

It was always in German, of course, that with Rosa I prayed, and German—long before I spoke English—that I spoke. And it was Rosa who read us Struwwelpeter aloud, teaching us how wicked it was to kill birds and hunt hards, how sinful it was to make fun of little black boys, how disastrous it was to not watch your step and to tilt back in your chair at table, and how fatal it was to play with matches or not eat your supper every night. It was Rosa who walked with us in the fields and woods, who made us daisy chains and garlands of flowers, and who, sitting with us under the great oak tree—a veritable "charter oak"—wove me a wreath of trefoiled leaves, green shiny leaves just tinged with russet red, wove me the wreath and put it round my brow. Such pretty shiny leaves, like ivy! Ivy indeed it was: poison ivy. It was the doctor who prescribed the milky lotion, sugar of lead, for a swollen and disfigured child. And it was that child who got hold of it and drank it, and who almost died. It was Rosa who, more than any other, fills my memory of those years.
Posted by Roy R. Behrens at 11:10 AM

small like the wren, chestnut hair, eyes of sherry

Above  Mary Snyder Behrens, one of a series of small (palm-sized) mixed media artworks called Trammels (2005). This is Trammel Box (White Wish), made of cloth, thread, and twine in which a box-like metal form is encased.

Emily Dickinson (describing herself in a letter to Thomas Wentworth Higginson)—

I had no portrait, now, but am small, like the Wren, and my Hair is bold, like the chestnut Bur, and my eyes, like the Sherry in the Glass, that the guest leaves.

I remember a funny dinner at my brother's, where, amongst a few others, were [Charles] Babbage and [Charles] Lyell, both of whom liked to talk. [Thomas] Carlyle, however, silenced everyone by haranguing during the whole dinner on the advantages of silence. After dinner, Babbage, in his grimmest manner, thanked Carlyle for his very interesting lecture on silence.
Posted by Roy R. Behrens at 2:27 PM

Ice cream, drinks and the half and half Iowa man 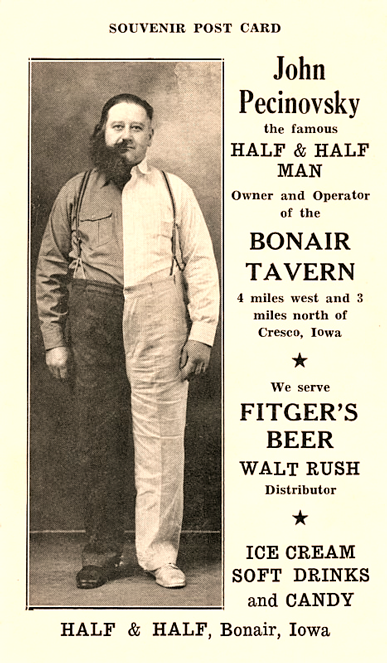 Above An advertising postcard featuring a tavern owner from Bonair IA named John Pecinovsky (1899-1942). After opening his tavern in the late 1930s, he attracted wide attention, was sought after by tourists, and was featured in Ripley's Believe It or Not, when he began to wear an outfit that was dark-colored on one half (bearded) and light on the other (clean-shaven). He was buried dressed the same way in nearby Cresco IA. See our earlier, related post.

Bonair has all but vanished now, but there is an American writer (she teaches writing in France) named Janet Hulstrand, whose relatives were from Bonair, who is in process of writing a memoir about her Midwestern origins called A Long Way from Iowa. See her post from 2014 titled A Little Town Called Bonair. I believe it was in Cresco (or was it Decorah?) that my father (who grew up near Ossian IA) saw Buffalo Bill and his Wild West extravaganza, c1912.
Posted by Roy R. Behrens at 10:12 AM 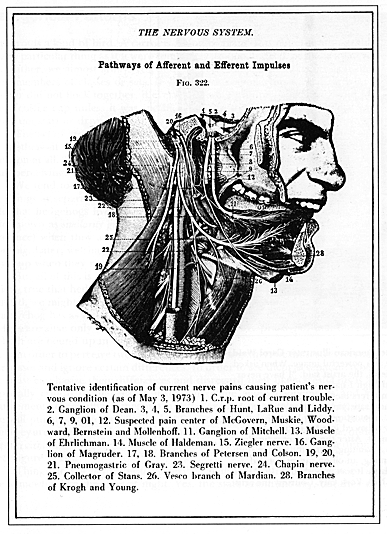 Above Kenneth Gogel, The Nervous System. Collage (1973). Permanent Collection of Art, University of Northern Iowa. Among his most memorable artworks is Gogel's portrayal of “the [very] nervous system” of US President Richard Nixon at the height of the Watergate scandal. Gift of Roy R. and Mary Snyder Behrens.

In the late 1960s, when I was an undergraduate art student at the University of Northern Iowa, one of my favorite teachers was an art education professor named Kenneth Gogel. He had been a student of Victor Lowenfeld at Pennsylvania State University. He was particularly interested in children’s drawings, and what those might reveal about (in Lowenfeld’s words) their “creative and mental growth.”

Part of the reason I liked him so much was his eccentricity. He had "a mind of his own,” so his comments were often surprising. His artwork was equally unpredictable. He wasn’t committed to staying within a consistent approach to art-making, whether medium, style, or subject matter. In one of his experiments, he used photo booth self-portraits and xerox (innovative at the time). In another, he rigged up a kind of terrarium, the sides of which were covered with a card-like material punched with random circular holes; inside the terrarium were ladybugs, which changed the pattern of the holes (on-or-off, like digital punch cards) as they climbed up and down the interior walls.

Of the artworks he was making then, one I especially admire is a large mixed media work titled A Bride and Her Father Visit the World’s Largest Turtle, dated c1968 (below). It is now in the UNI Permanent Collection of Art. Gift of Roy R. and Mary Snyder Behrens. The original source for the turtle is the vintage print at the bottom of this post.

Ken and I remained in contact now and then after I graduated, by exchanging cryptic notes. His were usually whimsical observations he made during lengthy faculty meetings or peculiar things he’d run across while nosing around in the library. One time, he sent me the patent diagram for a mechanical drawing device by Jean Tinguely. He was forever looking around at thrift shops and used bookstores, then sending me things that he thought I could use. He sent me my very first vintage World War I photograph of a dazzle-camouflaged ship, the USS Leviathan.

He even wrote to me when I was (miserably) in the US Marine Corps. When I answered candidly, he saved the letter (he saved nearly everything, repurposing the slightest scraps), then simply mailed it back to me fifteen years later.

Years later, when I was teaching temporarily at an awful art school in the South, I was surprised to hear his voice when I answered the phone one day at home. When I asked where he was calling from (I had heard that he was touring the country alone in a recreational vehicle), he replied, “Oh, I’m just a couple of blocks from your house. If you’re going to be there, I’d like to stop by briefly, just to say hello.” Moments later, he arrived, and, in spite of my insistence that he stay for a few days, we talked briefly and off he went. That time, I think he gave me a copy of Karl Gerstner’s A Compendium for Literates.

As an undergraduate, my major was Art Education, so that later, I would teach grades 7-12 for most of a school year, until the draft board broke my contract and sent me off to be a Marine. But in the last year before graduating with a BA degree, I was a student teacher for the first nine weeks of one semester. During the remaining half of that semester, Ken Gogel was my advisor for a full-time research project in which I proposed to read about the role of perception in visual art. I met with Ken only a few times, with the agreement that at the end of the term I would turn in a substantial paper about what I had discovered.

The paper I turned in was titled Perception in the Visual Arts. It anticipated many of the subjects that I would research and write about for the next fifty years. Although I was only an undergraduate, on a whim I submitted it to Art Education: The Journal of the National Art Education Association, the foremost journal in the field. It was published there in March 1969, just weeks in advance of being ejected from the classroom (not having a bone spur) and sent off to an unjust war. I am the same age as the man who now pretends to be the US President.