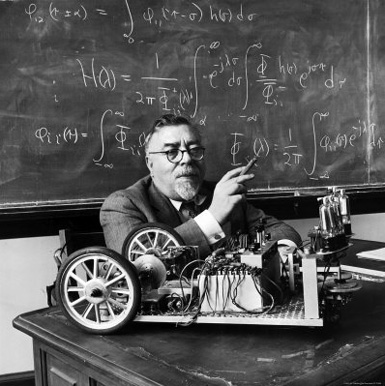 Above A portrait photograph by Alfred Eisenstaedt of Norbert Wiener in his MIT classroom, first published in Life magazine in 1956.

Recently I have been reading about the tortured life of the founder of cybernetics, MIT mathematician Norbert Wiener (1894-1964), in Flo Conway and Jim Siegelman, Dark Hero of the Information Age (New York: Basic Books, 2005). A famous child prodigy referred to in news reports as "the most remarkable boy in the world" (he knew the alphabet at eighteen months, began reading at three, and could recite in Greek and Latin at age five), he made momentous discoveries in his later life (the authors describe him as "the father of the information age") but he paid an agonizing price in social maladjustment and neurosis. In this biography, the authors recount the reactions of some of his colleagues to the adult Professor Wiener—

Wiener walked tirelessly around Tech [MIT] during those eventful years, and his unannounced drop-ins evoked a mixed response from his colleagues. [One of them] Jerome Wiesner…remembered Wiener's "daily visits around the Institute from office to office and his conversation that always began with 'How's it going?' He never waited for the answer before sailing into his latest idea."…

[Some people dreaded his visits.] One group of engineers resented Wiener's intrusions and devised an extreme countermeasure they called their "Wiener Early Warning System." [Steve J.] Heims reported that "they would contrive to place a man where he could see Wiener coming. He would alert the others, who would then scatter in all directions, even hiding in the men's room." Fagi Levinson knew of one colleague who hid under his desk when he saw Wiener coming.…"

I suspect that Wiener as a child prodigy was the inspiration for the encounter with the "boy genius" and his parents in Woody Allen's film Radio Days.
Posted by Roy R. Behrens at 1:16 PM