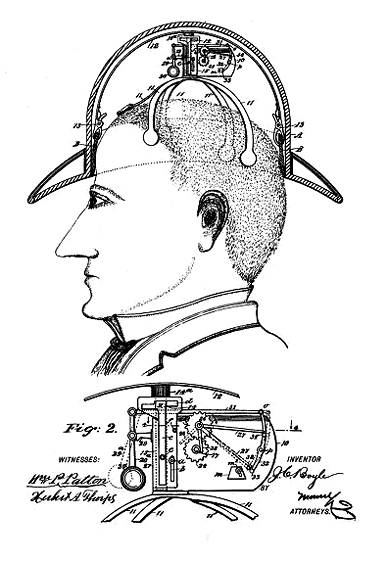 In John Pollack’s The Pun Also Rises: How the Humble Pun Revolutionized Language, Changed History, and Made Wordplay More than Some Antics (New York: Gotham Books, 2011), there is an account of a famous French gourmand named Alexandre Balthazar Laurent Grimod de La Reynière (1758-1837). According to Pollack—

As a young man, Grimod was known around Paris for wearing a mechanical wig that would tip politely, and apparently automatically, as ladies passed.

In reading that, I was reminded of a US patent (shown above), No. 556,248, titled Saluting Device, that was filed in 1896 by someone named J.C. Boyle. It seems to be more or less comparable to Grimod’s “saluting wig,” but in this case of course it’s a tip of the hat.

Here is a newspaper account of  Boyle's invention from The Democrat (Scotland Neck NC) on April 9, 1896, p. 1—

A patent has been granted J.C. Boyle of Spokane WA, for a "saluting device." It is a machine worn in the top of the hat. All you have to do is to slightly incline the head, and as the head starts forward the machine lefts the hat a little, holds it just long enough and in a graceful curve lets it back on your head.

Later that year, the following note was published in the Spokane Chronicle on September 30, p. 4—

J.C. Boyle, a member of the Drumheller Packing Company, but whose chief claim to notoriety rests in the fact that he invented the patent hat lift that removes the old labor of lifting the hat by hand, arrived home last evening after a prolonged visit to Kansas City and other portions of the east, where he has been for his health.