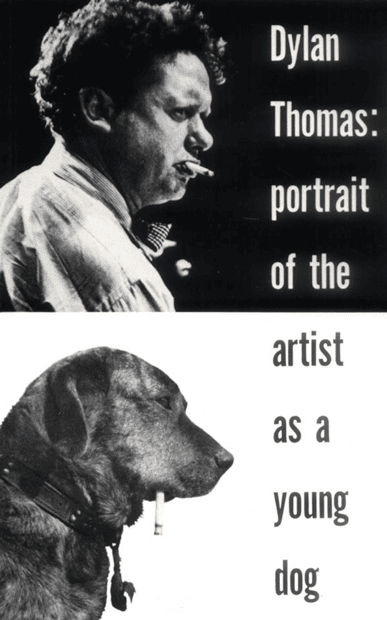 Above Cover of the paperback edition of Dylan Thomas, Portrait of the Artist as a Young Dog. New York: New Directions, 1968.

In those days I often used the George restaurant upstairs for business lunches and would usually find [Welsh poet] Dylan [Thomas] and his wife and friends installed when I went to meet my own guests in the downstairs bar. On one such occasion after he had stayed the night with us I was surprised to observe that he was wearing a shirt I recognized as mine, a blue one. But I was appeased on returning home that evening to find he had left behind a dirty one of much better quality after my wife had surrendered mine. On another day I was for some reason or other wearing a hat, a rather extraordinary blue felt hat I had picked up in Paris and one to which I was deeply attached; perhaps because it was the only hat I had ever found which my wife thought suited me. I left it in the bar while I went upstairs to lunch. When I called back again after lunch I was surprised to see it stowed away in an open bag Dylan had with him for his visit that afternoon to London. I insisted on reclaiming it, rather to his chagrin. He explained that [his wife] Caitlin though it suited him and it was the only hat he had. I did not risk asking her if it suited me also but replied that my wife thought it did and it was the only hat I had. I might as well have given in at once. For the next time we met in the George the same thing happened, only this time I didn’t notice till he got away. And when I inquired later about the hat’s fate, with even some faint hope of getting it back, he explained that he had left it on the rack of his compartment while he went to the restaurant car and in his absence some unscrupulous bastard had swiped it; no doubt someone who didn’t have a hat and who thought his wife would think it suited him.
Posted by Roy R. Behrens at 7:45 PM