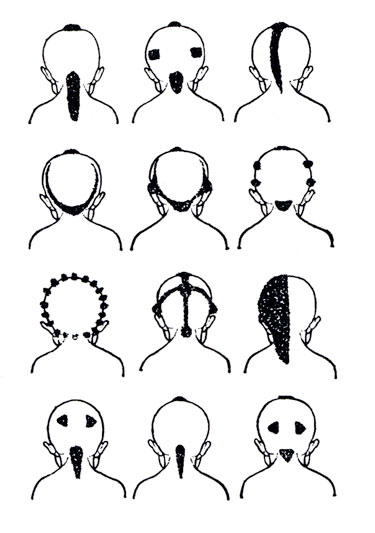 Above Illustrations of Native American boys' haircuts, according to designated clan, from Francis La Flesche, "The Osage Tribe: Child Naming Rite" in 45th Annual Report, Bureau of American Ethnology (1925-26), Washington DC, 1928. Top row (left to right): Head and tail of elk; head, horns and tail of bison; tuft of hair on bison's back. Second row: Head, body and tail of small birds; head, wings and tail of eagle; turtle shell, with head, feet and tail. Third row: Reptile teeth;  a compass, showing four directional points; shaggy side of the wolf. Bottom row: Horns and tail of bison; head and tail of deer; and head, tail and immature horns of a young bison.

Until recently, I had no idea that the Lakota Indians who performed in Buffalo Bill's Wild West show enjoyed playing ping pong. For more about this, check out the online photos of one of their games at the Denver Public Library's website. The spectators are other Wild West performers, including Mexican vaqueros, Russian Cossacks, US cavalrymen, cowboys, a Rough Rider, and other Native Americans. Seated in the center behind the table is a man in a suit who is holding up paper money, so presumably there was some gambling involved.

In 1893, concurrent with the Columbian Exposition or the Chicago World's Fair (but not officially part of it), the Wild West played in Chicago from May through October. There is a detailed account of what happened during the show's single most profitable season in L.C. Moses, Wild West Shows and the Images of American Indians 1883-1933 (Albuquerque NM: University of New Mexico Press, 1996). Here's an excerpt (p. 140)—

That season, Cody's Show Indians made good money, toured Chicago, took boat rides on Lake Michigan, ate peanuts and popcorn until they could eat no more, bought boutonnieres and funny coconut-fiber hats and wore them proudly, and on one occasion rode the merry-go-round [a carousel with wooden horses] by the hour. One evening in the high summer of Chicago's White City, fifteen Lakota led by Rocky Bear and No Neck mounted the painted ponies. As the carousel picked up speed, No Neck, holding the reins in both hands, gave a full-throated yell. Others in his party joined him. The News-Record placed the scene in its proper context. The Show Indians, observed the Record, "seem to like being jerked around on a carousel. They prefer it to the art galleries, and some people who are not Indians feel the same way." In all, about twenty-seven million people, a few hundred Indians among them, visited the fair. Most, Indians and non-Indians alike, probably had a glorious time.
Posted by Roy R. Behrens at 3:49 PM