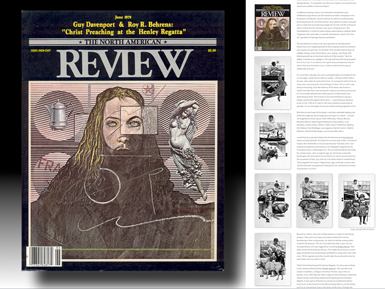 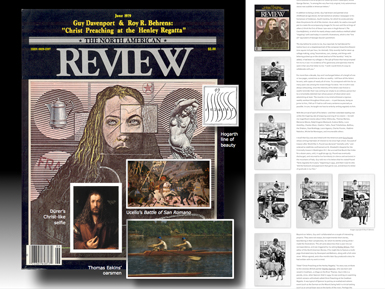 In speaking with students, I am increasingly puzzled by how quickly and completely society's past has been effaced by popular culture. They've all read Harry Potter of course, but are totally unfamiliar with Charles Dickens or H.L. Mencken ("old white guys," as one explained). They are thoroughly acquainted with the Mario Brothers, but have never heard of the James brothers, William (the writer) and Henry (the psychologist). Not even the Marx Brothers.

Above are stages in illustrations I designed in 1979 (full-color cover and six interior collages) to complement a short story by American fiction writer, essayist and scholar Guy Davenport, with whom I was then corresponding. Each day, increasingly few can understand what the imagery refers to, since education now rarely includes such peripheral gems of history as Paolo Ucello, Albrecht Dürer, Thomas Eakins, William Hogarth's line of beauty, Stanley Spencer—and Guy Davenport.

Guy Davenport, in "Pleasant Hill," an interview by Bernard Hoepffner—

I am a minor writer because I deal in mere frissons and adventitious insights, and with things peripheral.…

I'm not a novelist. Paul Klee was not a muralist. My ambition is to write as little as possible, in the smallest possible space.
All my discrete paragraphing is to force the reader to read. Most narrative prose can be read by running one's eye down the page. If I've worked one hour on a sentence, I want the reader to pay attention to it. I hope there's a web of symbols and themes running through all the stories.

The major writers in whose shadows I grow my mushrooms are Osip Mandelstam, Donald Barthelme, Robert Walser, and Walter Savage Landor.