Stendhal Meets Rossini / Who Crows for You? 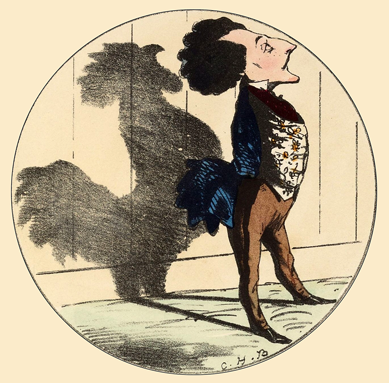 Stendhal (Marie Henri Beyle), author of The Red and the Black, describing an incident in a visit to Italy in 1817—

We halted in Terracina, and there…we were invited to take supper with a party of travellers newly arrived out of Naples. Gathered about the table, I observed some seven or eight persons, amongst whom, in particular, my eyes lighted upon a fair-haired young man, of some five or six-and-twenty years of age, astonishingly handsome in spite of a slight touch of baldness. I pressed him for news of Naples, and in particular, of music in that city: he answered my curiosity with answers that were clear-cut, brilliant and humorous. I enquired of him whether, when I reach Naples, I might still hope to see [Gioachino] Rossini’s Otello. I pursued the topic, asserting that, in my opinion, Rossini was the bright hope of the Italian school; that he was the only living composer who had true genius as his birthright. At this point I noticed that my man seemed faintly embarrassed, while his companions were grinning openly. To cut a long story short, this was Rossini.